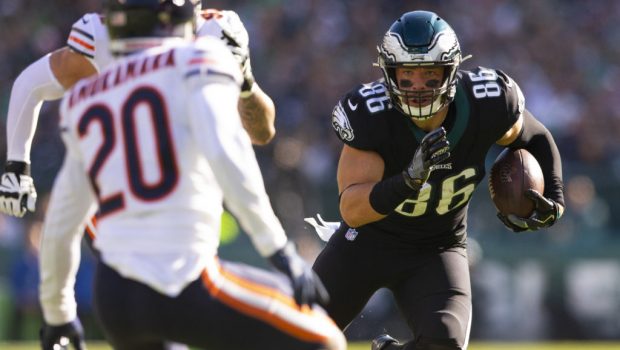 MEMO TO EAGLES: YOU WIN WHEN ZACH ERTZ IS TARGETED!

So, the Eagles are now 5-4, and their Nation will be happy for two weeks, until they host the big bad Patriots on Nov. 17.

The Eagles have won 15 of the last 20 games in which Ertz caught at least 70 percent of his targets, excluding a Week 17 game in 2017 when the starters barely played. Of course, they don’t win because Ertz is targeted. But unless the Eagles are a big-play offense — and without Jackson, those plays are harder to find — they need productive, chain-moving plays. They’re set back by incompletions. That’s why Ertz’s efficiency is critical.

Of Ertz’s nine catches, seven moved the chains and one was a touchdown. Only one catch didn’t result in a first down or a score. Three of the catches came on third down and one on fourth down.

Quarterback Carson Wentz said Ertz was the primary target “a little bit more” yesterday because of the way the Bears played defense. (The quarterback added that Ertz is “oftentimes” the primary option and that their connection is “always really, really strong.”) This season, certain defenses focused on taking Ertz out of games, such as Detroit in Week 3 and Minnesota in Week 6. Ertz caught fewer than 60 percent of his targets in both games. But Ertz also didn’t lead the team in targets in either game. Nelson Agholor had the most targets against the Lions, and Alshon Jeffery had the most against the Vikings. The Eagles offense is best when Ertz leads the target list, as he did on Sunday.

“He definitely was targeted a little bit more in this game, and rightfully so,” Pederson said. “When you throw him the ball, he can catch it, and he did a great job today. I think it was just a credit, obviously, to Carson to find him. He ran really good routes today. He was tough. He was physical. Made some contested catches, and that’s who Zach is. It was good to see.”