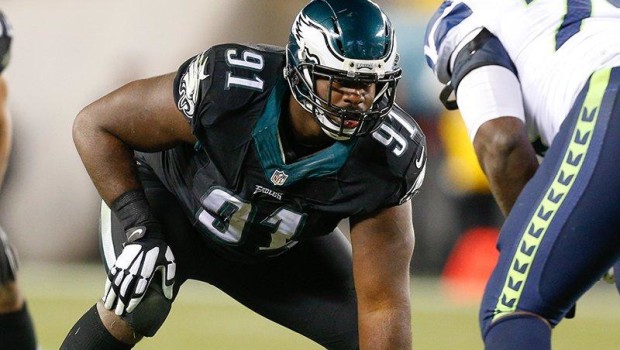 MEMO TO CAM NEWTON: EAGLE FLETCHER COX IS COMING AFTER YOU!

If your name is Cam Newton, you might want to take a look at the photo on this post.

You will be seeing a lot of Eagles defensive end Fletcher Cox tonight when the Panthers host the Birds.

In your line of sight.

Looking down after he sacks you.

Cox has shown flashes in the past, but we’re seeing the former first-rounder take a leap this season. Cox jumped off of the tape at times last year, but he finished the season with four sacks and seven quarterback knockdowns. Those are good figures for a player who often has to play the thankless, stat-shunning role of a two-gap interior lineman, but they undersell how gifted Cox is as an interior rusher.

He has nearly matched those figures this year, and it has only taken six games.

Cox already has five sacks and five quarterback knockdowns, highlighted by a three-sack performance against the Saints two weeks ago.

Cox is never going to have the freedom to penetrate and make plays like a Warren Sapp/Geno Atkins–type interior tackle in a 4-3 while he’s in Philly’s 3-4.

But he is a very good run defender who is simply too athletic to avoid getting into the backfield on a regular basis.