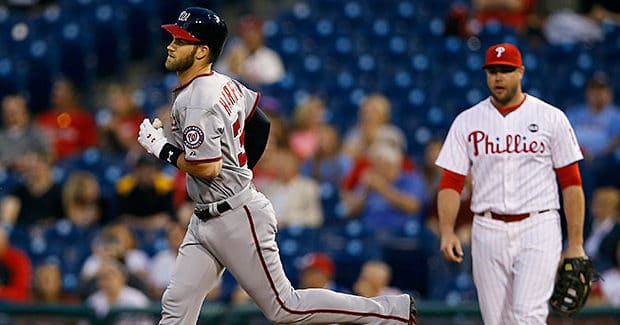 MEMO TO PHILLIES’ FANS: HARPER MAY LIKE YOU BUT NO WAY WILL HE SIGN WITH A DUMPSTER FIRE FRANCHISE!

Bryce Harper is going to be a free agent after the 2018 season and will undoubtedly sign a contract befitting one of baseball’s best players:

The Phillies have no chance to sign him if their 2018 is just as hopeless as 2017 has been.

Yes, Harper has said some nice things about Phils’ fans in the LA Times.

But those fans are kidding themselves if they think the Nationals’ Harper will sign with a team that is as pathetic as the Phils are now.

Phillies fans have a reputation for being rowdy and mouthy, but they aren’t the rudest fan base in MLB, according to Harper.

While speaking with the media ahead of All-Star activities, Harper said Braves and Mets fans were ruder.

So why would Harper say this?

Harper responded to the controversy later with a jab at the fans, saying he hoped they didn’t “throw any batteries at me.”

Perhaps it’s because the Phillies have been so low on the totem pole lately — they sit last in the NL East — and fans have nothing to brag about.