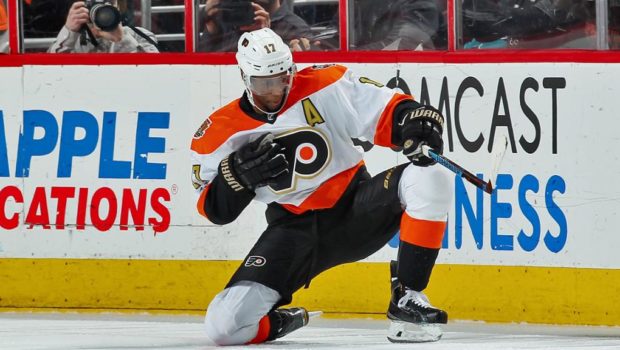 MEMO TO FLYERS: DEFENSE IS WHAT WINS ON WEST COAST TRIP!

The Flyers are headed out west to Edmonton, where the Oilers have a ton of skill, or Vancouver, which is eight games over .500 at home.

Jake Voracek believes the Flyers’ offense eventually will show up.

Even though they haven’t scored more than three goals in a game since Jan. 12.

“Defensively we were very good the last five games,’’ said Voracek, alluding to his team giving up only eight goals in that stretch. “We know it’s tight out there, we know we have to find a way to win the games.

“If you play good defensively, that’s how you win games. It’s not easy to go out there and get points; but if we play a tight-checking game, we have a chance to get four or five points.’’

Mark Streit also is preaching an emphasis on defense.

“We have to play well defensively like we have the last few weeks,’’ he said. “Offensively, just keep doing the same things and (if so), I think we’re going to get the bounces sooner or later.’’

The Flyers were scoring lots of goals early in the year but were also giving up a lot. That’s why they’re stuck in a minus-21 team goal differential, one of the worst in the NHL.

“At the beginning of the year we were scoring like crazy,’’ Streit said. “We scored three, four, five goals every game. All of a sudden we had that stretch where we didn’t play well and the whole game was a little bit off.

“Lately we’ve played well defensively but the offense has been off. Offensively, we can’t force it too much. Once we start taking chances, it’s going to bite us in the back, especially on the road. It’s going to be dirty hockey, so for us it has to be more of a grinding game.’’

The Flyers are headed out west to Edmonton, where the Oilers have a ton of skill, or Vancouver, which is eight games over .500 at home.