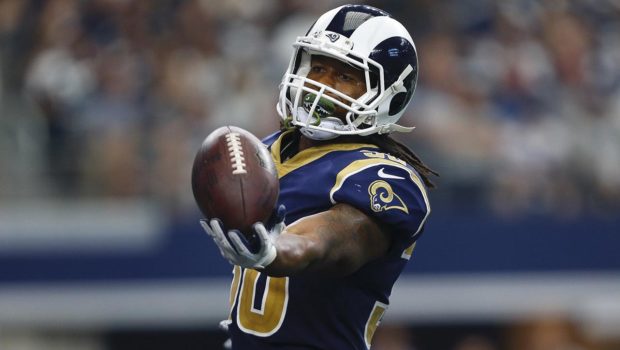 MEMO TO EAGLES’ D-BACKS: RAMS’ GURLEY IS A BEAST RECEIVER!

Ever since Darren Sproles went down, the Eagles have lacked a real receiving threat at running back.

Their backfield has caught just 37 passes for 335 yards. The Eagles’ committee approach is far different than the Rams’ use of Todd Gurley, who was the only running back to play a single snap for the Rams last Sunday.

Ane he has 563 receiving yards — more than the Eagles’ backfield combined!

The Eagles may not have any stars at cornerback, but they do a great job of limiting big plays in the passing game for opposing teams. In fact, no team in the NFL has allowed fewer pass plays of at least 20 yards than the Eagles (27).

Unfortunately for the Rams, that’s an area where they excel. Jared Goff is second in the league with 50 passes of at least 20 yards, consistently hitting on deep shots down the field. The Rams probably won’t have Robert Woods in this one, so that will obviously limit the passing game, too.