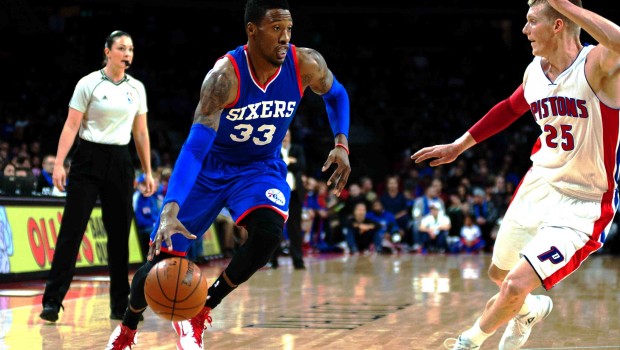 SIXERS FIND COVINGTON IS MORE THAN JUST A SHARPSHOOTER

The 6-9 Covington will be on display when the Sixers play at Atlanta tonight.

He’s a basketball lifer, having been an assistant in San Antonio and coached in Australia.

Which brings us to Robert Covington.

When the Sixers signed Covington in mid-November, the 23-year-old was referred to as a “sharpshooter” or “three-point specialist.”

After all, the 6-9 second-year-NBA player shot 37.0% from beyond the arc on 8.5 three-point attempts per game while playing for the run-and-gun Rio Grande Valley Vipers of the NBA Development League last season. But perhaps the descriptions didn’t tell the whole story, especially considering the fact that 13.8 of the 2014 NBDL Rookie of the Year’s 23.2 points per game came from inside the arc.

Over the Sixers’ last three games, Covington has set career bests in points on three occassions, scoring 17, 21, and 25 points in consecutive breakout performances. During that stretch, he’s made nine of his 17 three-point attempts (52.9%), but he’s also shot 13-of-23 (56.5%) on two-point attempts and has scored an additional 10 points at the free-throw line.

“He can do more than just shoot,” Brown said on Monday. “What he’s done, and this is always the evolution of shooters, [and take] that feared weapon and now can catch and go out of it. [He’s learned] how to deal with that closed space, and drive, and invite fouls, and not be afraid of contact. That’s the thing that has surprised me, where he has a little bit of that too.”