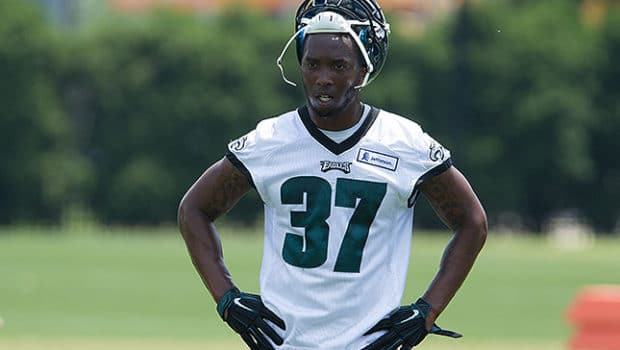 Jaylen Watkins’ stellar game last Thursday against the Bucs seems to have a given him a hold on the No.3 safety spot with the Eagles.

Watkins has lined up with the first-team defense numerous times since Malcolm Jenkins went down with a hamstring injury.

Watkins has also played corner in the past. He feels that his versatility will help him become a better safety.

“Being able to cover the tight ends, it’s easier for me,” Watkins said. “I am also used to quicker paced guys in the slot. Being out on an island, you develop that confidence level.”

Jim Schwartz mentioned last week how the team is trying to find out who will step up in the competition for the third safety spot. Whoever wins the battle will need to fill multiple roles on the team.

“I think that helps any player. He can play both safety spots and can play corner,” Schwartz said. “He has that athletic ability. The biggest thing for him is going to be his tackling ability. He’s played mostly corner, it’s a different angle at safety.

“That’s what he has been working on. What you have seen is his ability to make a play on the ball and he needs to