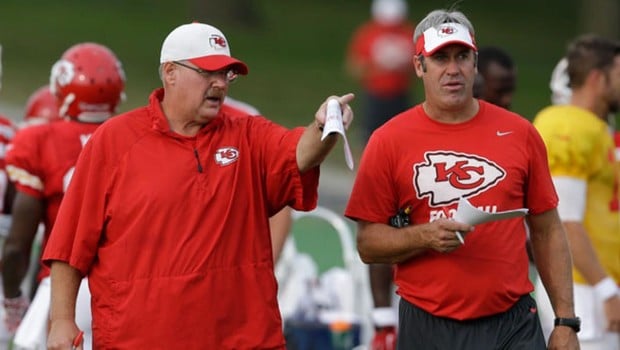 So, who exactly is Doug Pederson, whom the Eagles have all but announced as their next head coach — they’ll make an announcement as soon as the Kansas City Chiefs’ playoffs run ends.

Pederson spent most of his 10 NFL seasons as a backup quarterback (3-14 as a starter) before becoming a high school coach and then an assistant in Philly under Andy Reid, who brought him along to Kansas City (above).

Pederson has spent only three years in the league as a coordinator, all under a head coach who is a dominant offensive voice. Maybe Pederson has the “emotional intelligence” that owner Jeffrey Lurie is looking for and that Chip Kelly allegedly lacked, and maybe not.

But after Tom Coughlin pulled out of the chase and Ben McAdoo canceled his second interview, Lurie didn’t have much to choose from and figured Pederson might bring a little Andy Reid football back to the Linc.