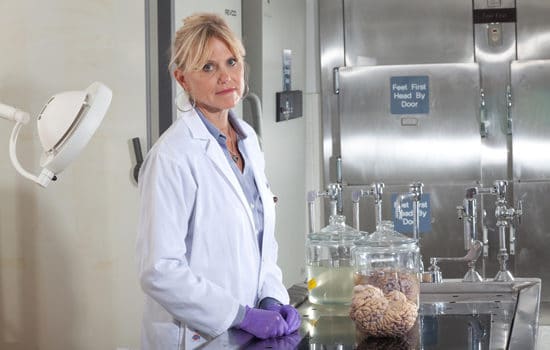 MEET THE ‘DR. DEATH’ IN CHARGE OF THE CUTTING-EDGE NFL CTE STUDY!

Of the deceased NFL players who donated their brains for research, 99 percent were diagnosed with CTE, according to a study she co-authored and was published in the Journal of the American Medical Association on July 25. That’s 110 out of 111 former NFL players. Researchers acknowledge that those numbers are biased because families have donated brains of those who were already displaying signs of CTE.

Dr. Ann McKee has spent decades examining brain tissue of former football, hockey, and soccer players, as well as war victims of bombings. She’s trying to solve the mysteries of CTE, for which there is no cure or treatment. Currently CTE cannot be diagnosed until after death. It’s especially upsetting when she meets future donors.

“I feel like Dr. Death. I do,” she said. “I just feel so helpless.” She admits it is very stressful. She has trouble sleeping at night.

McKee, 63, grew up outside Green Bay, Wis., the youngest of five children. She and her family loved football. Her father and four brothers played college football. She played in touch football games with them. Her brothers would block for her and urge her to somersault over them. “I never got hurt,” she said: