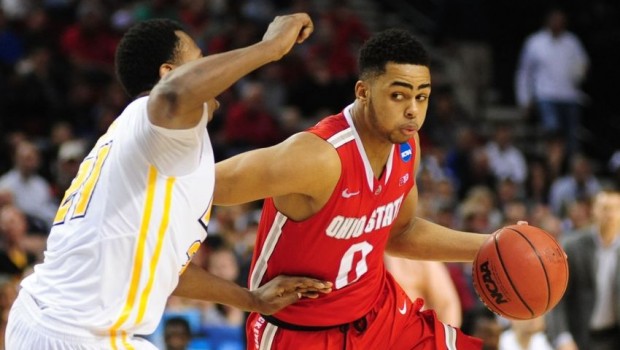 If you are a Sixers fan and are still pining over the loss of point guard Michael Carter-Williams:

MCW, who was traded to the Milwaukee Bucks a months ago, is doing no better for coach Jason Kidd than he did for Sixers coach Brett Brown.

His stats for the Bucks:

He is still a lousy shooter and a turnover machine.

Now let me introduce you to a real point guard: D’Angelo Russell, a freshman at Ohio State, who may be running the show for the Sixers next season.

He’s a better shooter than MCW and a better distributor of the ball. And, most importantly for a point guard, he has the attitude of a leader.

Before Russell attempted to clinch his team’s NCAA tournament opener at the free throw line Thursday evening, Ohio State coach Thad Matta called the freshman over some for last-second instructions.

Russell has every right to be so confident after adding to an already brilliant freshman season by leading his team to a 75-72 overtime victory over seventh-seeded VCU. The 6-foot-5 combo guard torched the Rams for a game-high 28 points even though Shaka Smart switched multiple defenders on him and trapped him coming off ball screens most of the game.

Sometimes Russell used VCU’s trademark aggressiveness against it by going backdoor and losing his man for layups. Other times he’d free himself for a catch-and-shoot three sprinting around screens or attack off the dribble with the ball in his hands. A few times he also was able to create scoring chances for others by drawing so much defensive attention.

When three VCU defenders trapped Russell after he curled around a ball screen late in regulation, he had the vision to find forward Keita Bates-Diop spotted up alone on the left wing for a go-ahead 3-pointer. Russell didn’t even have to work that hard a few minutes later in overtime when two defenders went with him after he set a top of the key ball screen, giving Shannon Scott a wide open path to the rim for a layup.

“He’s so good at making the right read,” Matta said. “You know, the great thing when you try to get creative for D’Angelo, he picks it up just like that. I think that makes his knowledge of the game of basketball, he knows exactly what we’re trying to get accomplished and can execute it.”

While Ohio State’s dearth of marquee victories this season don’t suggest it’s likely to upset second-seeded Arizona on Saturday or make a deep run in this tournament, the Buckeyes do have at least one attribute of a contender. They have one of the nation’s elite players, a freshman with the talent to do what Shabazz Napier did for UConn last season or what Carmelo Anthony did for Syracuse 12 years ago.

Russell wasn’t mentioned in the same reverence as Jahlil Okafor or Karl-Anthony Towns when he arrived at Ohio State this past summer, but the Louisville native impressed his new teammates and coaches instantly with his multifaceted game. They discovered quickly he had the size of a wing, the vision of a point guard and the natural ability to knock down jumpers or get to the rim.

On a senior-laden Ohio State team seeking to replace go-to scorer LaQuinton Ross and four-year starter Aaron Craft, Russell emerged as the Buckeyes’ main threat almost immediately. He has averaged 19.3 points per game and has scored in double figures every game since Ohio State’s third game of the season.

“As a freshman coming in, we knew he was good but we didn’t know that he would be this consistent,” Ohio State assistant coach Jeff Boals said. “You have five seniors on this team, and they know he’s the best player. They know he’s going to take tough shots and he’s going to get them the ball when they’re open.

Russell’s scoring and facilitating was the biggest reason Ohio State advanced on Thursday, but it certainly wasn’t the only one.

VCU’s vaunted full-court press was ineffective against Ohio State after the opening minutes as Scott and Russell carved it up and forced the Rams to fall back into a less aggressive scheme in the second half. Only six of the 11 turnovers the Buckeyes committed came after the opening 10 minutes.

Ohio State also enjoyed success defensively by going to a zone after it fell behind by 12 midway through the first half. The zone slowed the tempo of the game, stagnated the VCU offense and made the Rams even more reliant on 3-pointers.

Nonetheless, the story was Russell’s ability to take over a game that Ohio State would have lost without him. He wasn’t fazed by a big stage, late-game pressure or a highly physical game.

Blood streamed down the left side of Russell’s face as he walked to the bench late in the second half after taking an elbow above the eye trying to contest a Doug Brooks layup. Russell received treatment on the bench for a few minutes while referees reviewed the play before returning to the floor in time to shoot a pair of free throws.

“I had no clue that it was a flagrant foul,” Russell said. “I just tried to contest it. Five minutes later, I was shooting free throws.”

Russell was all smiles postgame even though he expected to get stitches later Thursday to close the gash above his eye. Whatever pain Russell felt from the cut was nothing compared to the joy of having extended his team’s season at least another two days.