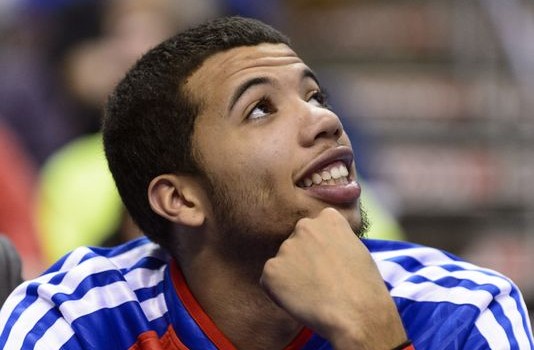 MCW TO THE RESCUE AS SIXERS BEAT PACERS FOR 7TH WIN

Michael Carter-Williams hit a running layup with 9.9 seconds left to lift the Sixers to a 93-92 victory over the Pacers on Saturday night at the Wells.

Tony Wroten had 20 points to lead Philly, which won its second straight game for just the second time this season. It’s the 76ers third victory in the last four games. They won for the second time at home and are 7-12 since beginning the season 0-17.

”We try to stay pretty grounded and understand what we’re all about and what our purpose is,” Philadelphia coach Brett Brown said. ”(The 0-17 start) does seem a while ago. Whether what we’ve done lately has erased that stat, that fact from people’s minds, I don’t know.”

David West tallied a season-high 28 points for the Pacers but came up short on a 13-footer at the buzzer that would’ve won it for Indiana. West had put the Pacers in front with a fadeaway 12-footer with 17.6 seconds left.

But Carter-Williams sent Philadelphia to the win with his layup eight seconds later. He also had nine assists.