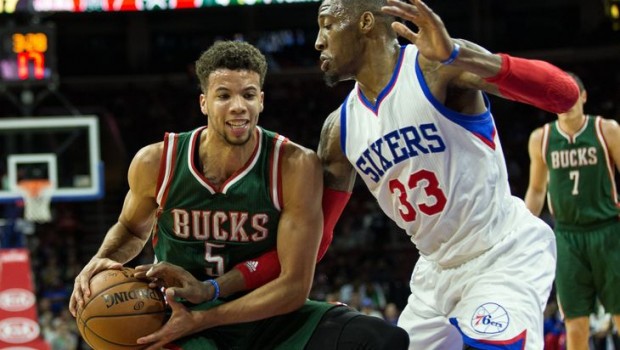 If you are among the many Sixers fans who rue the day Michael Carter-Williams was traded to Milwaukee almost two months ago, you got a lot of fuel for your fire last night.

MCW matched his season-high with 30 points in his first game back in Philly to lead the playoff-bound Milwaukee Bucks to a 107-97 victory at the Wells.

O.J. Mayo and Ersan Ilyasova had 13 points apiece and Giannis Antetokounmpo chipped in 12 for the Bucks, who capped a turnaround from the NBA’s worst record last season with a playoff berth with Sunday’s win over the Nets.

Robert Covington scored 25 points and Hollis Thompson added 19 for Philly, which played without Rookie of the Year contender Nerlens Noel (ankle) for the second straight game while losing its ninth in a row. The 76ers, who committed 30 turnovers, entered play with the league’s third-worst record. They dropped to 18-63.

Carter-Williams was Rookie of the Year last season as a 76er, thought to be part of Philly’s future before his surprising trade to Milwaukee on Feb. 19. Philly fans greeted Carter-Williams with applause during introductions and louder cheers during the second quarter when the team thanked him with a video tribute.

The Bucks were back on the court a day after clinching a playoff spot. Milwaukee is locked into a No. 6 seed and will play either Toronto or Chicago in the first round.

After an uncharacteristically poor defensive performance in the first half, Milwaukee clamped down in the third quarter to turn its 58-53 halftime deficit to an 80-78 lead entering the final period. The Bucks held the 76ers to 24 percent (4-for-17 shooting) in the period while forcing 10 turnovers.

Mayo scored six of Milwaukee’s seven points during a 7-1 run over the first 1:12 of the final period to take its biggest lead, 87-79, to that point. The Bucks, whose fourth-quarter advantage reached as many as 17, had little trouble holding off the 76ers from that point.

Using their regular lineup despite having clinched the postseason, the Bucks didn’t take the night off against Philadelphia. But they sure played like it in the first half.

Behind 18 first-half points from Covington, Philly took a 58-52 lead at the break. That’s out of character for a Bucks team that entered second in the NBA in defensive points per 100 possessions and first in turnovers (17.2 per game). And for a Sixers team that entered last in the league in field-goal percentage (40.8 percent) and second worst in scoring (91.8 points per game).

Mayo and JaKarr Sampson got into a verbal confrontation with just under six minutes remaining, and the teams came together without any punches being thrown. Bucks coach Jason Kidd came on to the court to restrain Mayo, who later got into a shoving match with Henry Sims, drawing a technical foul and another court visit from Kidd with 2:13 left. Sampson then got a technical with 1:41 remaining after an altercation with Jerryd Bayless.