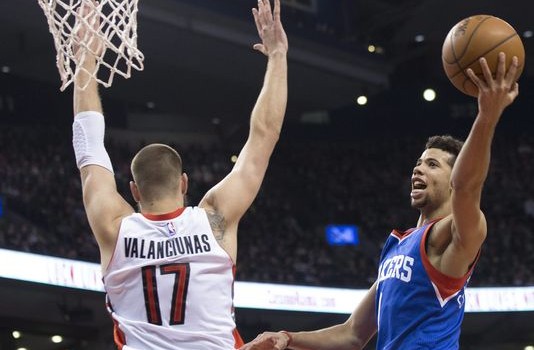 Everywhere the Sixers travel in this woebegone season they face their past — even when their future is starting to look brighter.

Lowry had 18 points and 12 assists, DeMar DeRozan returned from a groin injury to score eight of his 20 points in the fourth quarter and the Raptors never trailed.

Carter-Williams scored a season-high 29 points and Nerlens Noel had 12 for Philly. The 76ers lost their second straight and fell to 2-7 on the second night of back-to-backs. Philly, which lost at home to Atlanta on Tuesday night, has failed to reach the 100 point mark in 15 consecutive games.

Guard Tony Wroten, the Sixers’ leading scorer, did not make the trip to Toronto after spraining his right knee Tuesday.

DeRozan was 9 of 14 from the field and had four rebounds and three assists in 29 minutes.

Toronto led by 10 to begin the fourth and widened its lead on a four-point play by Williams.

K.J. McDaniels hit a jump shot and made a pair of free throws to cut it to 79-73 at 7:42, but DeRozan scored baskets on either side of a 3 by Patrick Patterson as the Raptors pulled away with a 7-0 spurt and weren’t threatened again.

Toronto led 13-0 before Philly’s first basket, a dunk by Carter-Williams at 8:04 of the first. Williams had 11 points in the opening quarter, but Williams made a 3 at the buzzer as the Raptors led 34-19 after one.

Noel scored eight points in the second and Carter-Williams had seven as the Sixers used a 12-1 run and connected on 11 of 22 field goal attempts to cut Toronto’s lead to 50-46 at halftime.