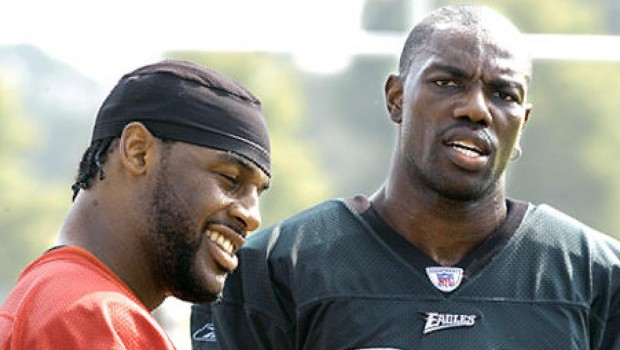 MCNABB PUKED BECAUSE HE WAS DRINKING NIGHT BEFORE SUPE, TERRELL OWENS CLAIMS!

As this year ends and President Trump still claims he won the election even though he got 7 million fewer votes than Joe Biden, another controversy has focused Philly sports:

The former Eagles teammates had their falling out over 15 years ago and things have not gotten any better since.

Owens was on the latest episode of Bleacher Report’s “Untold Stories” series hosted by Master Tesfatsion, and Owens dished on the beef between him and McNabb — but most important, he discussed the story about McNabb allegedly throwing up in the huddle during Super Bowl XXXIX.

The story about McNabb’s Super Bowl puking incident has been floating around since the Eagles lost to the New England Patriots in Super Bowl XXXIX. McNabb denied that it happened during his episode of “Untold Stories” in January. T.O. has spoken to teammates who say otherwise.

As for why McNabb would be throwing up in the huddle during the most important game of his career, Owens says that his former Eagles teammates gave him the dirt: McNabb was out drinking the night before and was hungover during the game.

Owens told Tesfatsion that he was happy to let bygones be bygones and start anew with McNabb, but McNabb wasn’t interested. And now Owens doesn’t want to make up because he says McNabb is being “phony” and blaming him for the breakup of the mid-2000 Eagles.

“I’ve tried — he’s phony,” Owens said. “I’ve tried to be cordial with the situation. I thought we had squashed it, but then you guys did an interview and all this resurfaces again.”

Owens is referring to McNabb’s episode of “Untold Stories” from January 2020, in which he said that T.O. and all his drama is why the Eagles didn’t run it back after losing the Super Bowl. That doesn’t square with what McNabb said about Owens in the lead-up to the Super Bowl.

“Just listening to some of the comments and statements about, ‘I pretty much ruined the opportunity to run it back’ [rubbed me the wrong way]. Leading up to the Super Bowl, all the questions within the media were geared around, ‘Was I gonna make it back?’ … I guess, for whatever reason, the statement of [McNabb] saying that he didn’t need me to win the Super Bowl or play in the Super Bowl, I felt that was a slight.

“And then, I saw the [2020] interview and he said that I ruined their chances. So for me, it was contradictory, to say that you didn’t need me to play in the Super Bowl and win it, but then I prevented you guys from running it back. You didn’t need me then, so why would you need me to run it back? For me, I felt like it was bush league, to be honest.”

Is it ridiculous that these guys are holding on to a beef that’s more than 15 years old? Absolutely. But as long as McNabb continues to blame Owens for stuff that happened over a decade ago, Owens is going to continue to be mad. It’s kind of hard to blame him.