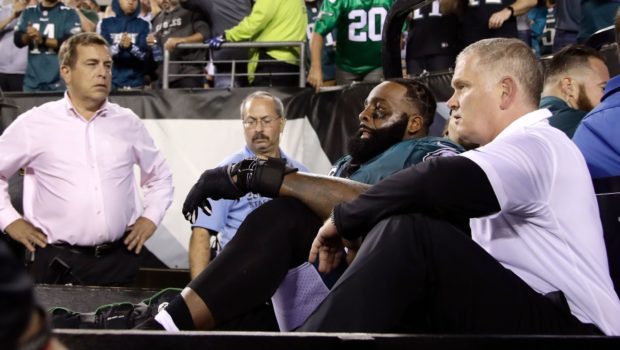 MCL OR ACL! HOW WILL EAGLES REPLACE THE GREAT JASON PETERS?

Eagles left tackle Jason Peters was carted off the field with a knee injury during the third quarter of the 34-24 win over the Washington Redskins.

While engaged with linebacker Ryan Anderson in pass protection, defensive lineman Ziggy Hood was blocked into the back of Peters’ leg, and the 14-year vet collapsed to the ground.

Teammates surrounded the nine-time Pro Bowler as the medical staff fitted him with an air cast.

Chants of “Jason Peters!” broke out in the crowd as an emotional Peters was carted off, pumping his fist in response. He did not return to the game.

Peters is due for an MRI today, and the Eagles are hoping it’s an MCL and not an ACL.