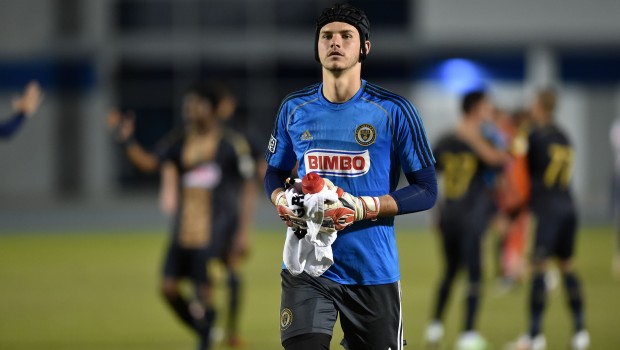 MCCARTHY: FROM NORTH CATHOLIC AND LASALLE TO UNION STARTER!

Sports are filled with “feel good” stories that keep us coming back for more, even when the big money and drugs and whining seem to dominate the dialogue.

And there is no better story than:

On Saturday afternoon, McCarthy, the 22-year-old rookie, will take the field against NYCFC for the first time as the starting goalkeeper in an MLS game.

And he’ll be doing it in his hometown, in front of his family and friends, and in a park he’s dreamed of playing in since the day ground broke six years ago.

“It will truly be a dream come true,” McCarthy said on Wednesday. “It will probably all sink in that I’m actually playing for my hometown team when I’ll be in the stadium and playing. It will be indescribable and I’m just going to enjoy the moment.”

It’s a journey that will reach its pinnacle at PPL Park, fitting in that it didn’t start too far from the stadium, either. Born and raised in Philly, and currently residing in Cinnaminson, McCarthy has more Philly-blood in him than most fans.

He starred at North Catholic High School before moving on to La Salle University in 2010. There, he was a four-year starter for the Explorers, was named to three different All-Atlantic 10 teams and was an NSCAA Scholar All-American. He was also named to the MAC Hermann watch list prior to his senior year, an award annually given to the best collegiate soccer player.

“It means a lot more to be in front of family and friends,” McCarthy said. “And just being able to see the fans that I’ve met at some of the appearances so far, who have supporting me off the field, and now to be on the field actually playing, it’s really going to be great.”

After graduating from La Salle, McCarthy latched on with Rochester Rhinos of USL and instantly succeeded, winning both the league’s Rookie of the Year and Goalkeeper of the Year awards.

“I’ll train this week like I’ve trained the past five weeks and all of preseason,” he said. “If I got called upon earlier, or if I didn’t get called upon this game, it would be the exact same training. Same exact habits and I’m just trying to get better than I was the day before.”

Of course preparing for a team like NYCFC has to be a little different, right? After all, the league’s newest team boasts a thorough roster with plenty of well-known players.

“One of my friends texted me and said, ‘You’re going to be playing against Frank Lampard.’” McCarthy said laughing. “’And I was like well, not yet.’ But you prepare for it like any other game. Being able to play against NYCFC, guys like Mix [Diskerud] and David Villa, and all the other great guys on the team, you want to enjoy the moment and be like ‘I’m on the field with World Cup players, world-class players’ – you really just want to enjoy it.”

McCarthy will get the call after the team decided to bench Rais Mbolhi. He’s been with the team since the start of training camp this year, and played in three games during the team’s preseason. He’s also been the backup for each of the five games so far this year.

For head coach Jim Curtin, it’s well deserved.
“John’s been excellent in the preseason,” Curtin said. “He’s earned the right to be the starter. I’ve been very impressed with him. He’s a kid that I have faith in and I know our players have faith in, too.”

But even though McCarthy is still relatively new with this team, he isn’t new to Curtin – also a Philly kid through and through.

“He’s tough – he’s a kid that I’ve watched play for a long time,” Curtin said. “Whether it was pickup games at YSC that I was involved in when I was retired. He was a guy that I rated highly and I monitored him while he was on trial at Seattle and in USL Pro at Rochester. He’s a guy that I have faith in to do the job.”

Make no mistake, though, McCarthy’s progression has been quick. He’s credited a strong support staff here at the Union, including goalkeeping coach Paolo Grilo and the two players – Mbolhi and Andre Blake – that he’s competing with on a daily basis.

“Paolo, Rais and Andre have been great to me,” McCarthy said. “They’ve all had experience at international levels and they’ve been great at always supporting me. When you make a mistake, they’ll come and talk to you. It doesn’t always come from Paolo, it comes from Rais and Andre and it’s great to hear because I try to do the same for them.”

McCarthy was especially appreciative of Grilo, who joined the Union last season.

“Paolo talks about it all the time – never drop your head no matter what because things happen in practice and in games,” McCarthy said. “As long as he sees you’re improving and trying to improve, then it’s in good spirits and that’s how he wants you to look at it. He’s very demanding, but he’s demanding in a good way, never negative, he’s always positive.”

Of course the only problem now for McCarthy is getting enough tickets for Saturday. Maybe playing in front of your hometown is almost too good. After all, requesting several hundred tickets isn’t easy.

“I was asking people for tickets yesterday,” McCarthy said laughing. “I asked a couple of rookies. I might be asking [team coordinator] Josh [Gros] for a couple more tickets. My aunts already bought tickets. My family was planning on coming to this game anyways, so I guess it kind of worked out.”