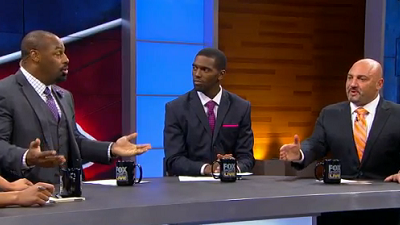 There was a time when Donovan McNabb was a very good quarterback with the Eagles.

And there was a time when McNabb considered himself as good as Peyton Manning and Tom Brady.

In his dreams, that is, because no one else thought he was as good as those future Hall of Famers.

Now, as a commentator on the awful Fox Sports1, McNabb is paid to give opinions of others, instead of himself.

And he is doing a woeful job.

The New England Patriots had a rough game on Monday Night Football, losing 41-14 to the Kansas City Chiefs in one of the ugliest losses in the 15-year tenure of Bill Belichick.

The Patriots dropped to 2-2 with the loss, causing some analysts to question things that haven’t been questioned in a long time, including the play of quarterback Tom Brady.

Brady was 14-for-23 for 159 yards with a touchdown and two interceptions against the Chiefs.

McNabb, now an analyst on Fox Sports 1, said this could be Brady’s last year in New England if his ineffective play continues.

“(Jimmy) Garoppolo got in there and moved the ball down the field and got the ball in the end zone. If this continues on for another five or six weeks, believe the rumblings will start that this could be Tom Brady’s last year in New England. I’ll put it out there first.”

McNabb’s comments sparked a passionate response from Jay Glazer and Randy Moss on the set of “Fox Sports Live.”