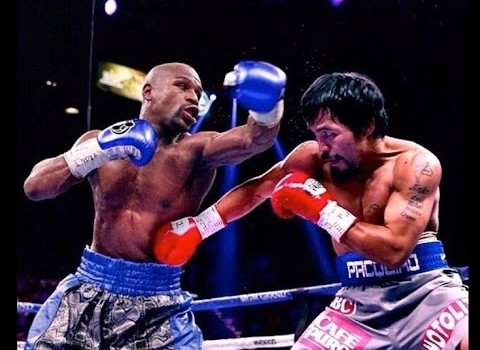 MONEY PASTES PACQUIAO IN ANTICLIMACTIC ‘FIGHT OF THE CENTURY’

It took five years to get Floyd Mayweather Jr. and Manny Pacquiao into the ring.

And if there was any doubt about the bout’s significance, referee Kenny Bayless told the boxers beforehand: “This is a fight that the world has been waiting for.”

Mayweather needed all of his trademark boxing skills to outfox a determined but ultimately frustrated Pacquiao, winning the so-called “Fight of the Century” at the MGM Grand on Saturday.

The welterweight championship went a full 12 rounds, with the judges agreeing on a unanimous decision.

“I knew he was going to push me,” Mayweather said. “I was a smart fighter. I outboxed him.”

Mayweather knew what to expect from this fight, saying that previous opponents had tried “to come forward and throw a lot of punches.”

“If that’s the game plan,” he said of Pacquiao, “we’ll have to see how it breaks down.”

Many of Pacquiao’s combinations missed the mark throughout the early rounds as Mayweather stayed on the move, keeping out of range or clinching when his opponent drew too close.

A solid left counter-punch brought Pacquiao to life midway through the fourth round. Mayweather backed to the ropes and covered up. It was hard to tell whether he was hurt, but the exchange certainly gave Pacquiao confidence.

But the fifth round brought a return to form as Mayweather moved, ducked, threw select punches and stayed away from any serious threat.

“He’s moving around,” Pacquiao said. “It’s not easy to throw a lot of punches.”

As a boxer who goes by the nickname “Money,” Mayweather came into this fight focusing on the tens of millions of dollars he would earn for himself and his family, saying his daughter can’t “eat no record.”

By contrast, Pacquiao had stayed true to his reputation as a good guy, smiling his way through much of the last week, thinking about the people in the arena and a global pay-per-view audience.

“This is a great responsibility for me,” he told a sold-out crowd at the weigh-in. “Whether you’re a fan of Mayweather or a fan of Manny Pacquiao, you deserve to have a good fight.”

The action settled into a familiar pattern by the middle rounds. While Mayweather succeeded with a defensive brand of boxing, Pacquiao found success in short bursts, driving his rival back with strong left hands, rousing the crowd to cheers.

But whenever Pacquiao seemed to be gaining an edge, Mayweather would spin away, delivering a quick, scoring blow on his way out.

The sheer volume of punches that Pacquiao needed to win? It never materialized.

As the seconds ticked down, Mayweather danced in circles, waving his fist in the air.

“When the history books are written,” he said, “it was worth the wait.”

EAGLES 2-ROAD FAVE VS BROWNS: DESHAUN WATSON MAY NOT PLAY!