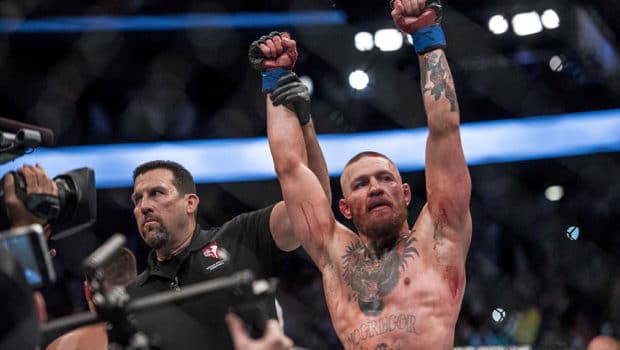 MAYWEATHER-MCGREGOR AUG. 26: MONEY HAS EVERYTHING TO LOSE!

Floyd Mayweather is putting his legacy on the line when he takes on Conor McGregor (above) on Aug. 26, according to the fighter’s manager and confidant Leonard Ellerbe.

Ellerbe, CEO of Mayweather Promotions, insisted to USA Today that his friend’s reputation in the sport would be irrevocably damaged if he were to be defeated by McGregor, the Irish mixed martial arts star.

“Floyd is putting it all on the line,” Ellerbe said, referring to Mayweather’s esteemed place in the sport, having racked up 49 straight victories before his short-lived “retirement.”

Despite having celebrated his 40th birthday earlier this year, making him more than 11 years older than McGregor, losing for the first time against someone who has never boxed competitively would be a devastating blow to the American.

Realistically, most experts think such an outcome could never happen, with odds on a Mayweather victory ranging from 1:100 to 1:9 in various sports books both in Las Vegas and worldwide.

“His stand-up game is very (expletive) impressive,” Ellerbe said. “It doesn’t look like he hits hard but the next thing you know he hits them and they are wobbling around or they go down and you are left thinking, (expletive), he (expletive) them up. He had better not touch Floyd with those shots.”

Regardless of the apparently one-sided nature of the match-up, Ellerbe said Mayweather would be training as hard for this fight as for any in his career. Indeed, Mayweather announced the contest on his Twitter account shortly after McGregor did. The reason, according to Ellerbe, was because he was in the middle of a grueling road session.

“We would be a bunch of fools to sleep on this and listen to all the (expletive). This is a fight Floyd is taking very, very seriously. We all know in boxing that it just takes one shot. A kid with that power (like McGregor), it doesn’t even have to be a clean shot. We know with McGregor we have to pay very close attention.”

The fight will be at 154 pounds, which should pose no trouble to either contestant. Mayweather has fought at both 147 and 154 in recent years, while McGregor has won UFC titles at featherweight (145), lightweight (154) and split a pair of fights with Nate Diaz at 170.