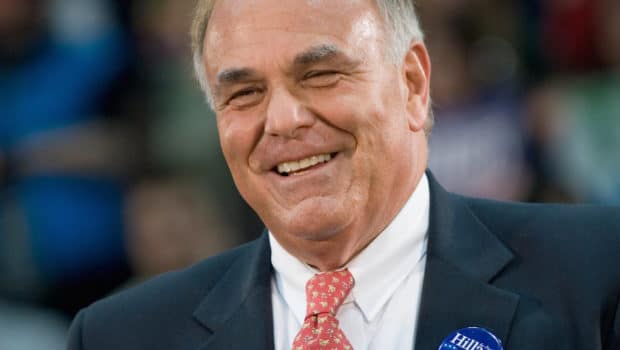 So, ex-Philly mayor Ed Rendell (above) and current mayor Jim Kenney slapped around dumb-ass New Jersey Gov. Chris Christie, who over the past few days said the Phillies and Eagles are awful — and so are our fans!

“He’s got the biggest ‘L’ on his forehead of anybody in the country,” Kenney said on WIP today, highlighting recent poll numbers that show Christie is the most unpopular governor in the history of New Jersey politics.

“He ran for president for one hot mess minute and then when that was over he was moon-dogging Trump thinking he was going to get a big job,” Kenny said. “Now I think he’s just bitter and has got nowhere to go. Who’s gonna hire him?”

“I have a big nose and he has a fat ass,” Kenney said. “Just as life deals you. But PA and Philly taxpayers paid for that box he was sitting in to cheer on the Cowboys.”

Rendell also weighed in on Christie’s comments, saying he thinks the New Jersey governor is “totally out of control.”

Rendell told Cataldi that Christie’s 18 percent approval ratings puts him somewhere on the popularity scale between being an indicted politician and a Russian spy.

“It’s like the guy is trying to driving his numbers down to zero,” Rendell said. “I think the guy needs help.”