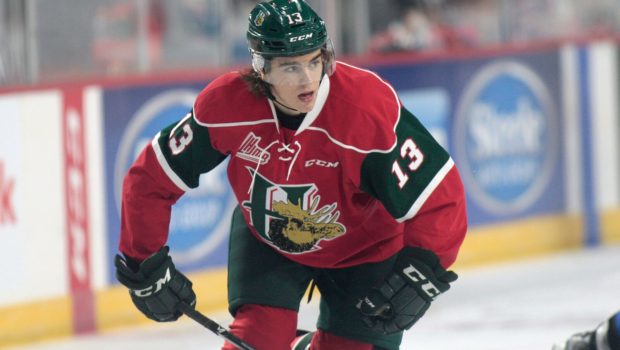 Here’s your latest mock for the NHL draft:

The Devils get the franchise center they need to invigorate an offense that averaged 2.20 goals per game this season, third-fewest in the League. Patrick (6-foot-2, 198 pounds) played 33 games because of injuries but was 10th in the Western Hockey League at 1.39 points per game. The injuries won’t prevent him from going No. 1. Scouts still remember him winning MVP of the WHL playoffs last season as a 17-year-old.

Born in Switzerland, Hischier (6-1, 176) made the move to the smaller North American ice look easy this season with 86 points (38 goals, 48 assists) in 57 games. Scouts also love his poise and willingness to play hard in all three zones.

The talented center not only dominated his high school league and was named Mr. Hockey in Minnesota, he led the United States Hockey League with 1.25 points per game in 24 games with Green Bay. Mittelstadt (6-1, 201) is committed to the University of Minnesota but it might not be long before he adds some depth through the middle in Dallas.

Heiskanen’s two-way skill set, skating and smart play would fill a big need for the Avalanche. As a 17-year-old this season he had 10 points (five goals, five assists) in 37 games with HIFK in Liiga, the top league in Finland. Heiskanen (6-0, 170) was dominant against players his age at the 2017 IIHF World Under-18 Championship with 12 points (two goals, 10 assists) in seven games.

With the Canucks someday looking ahead to the post Daniel Sedin and Henrik Sedin era, having Vilardi and Bo Horvat through the middle would provide a solid foundation. Vilardi (6-3, 201) was an offensive driver for Windsor and scouts like his composure and playmaking ability, especially down low in the offensive zone.

With their first draft pick the Golden Knights select the player some scouts believe is the best goal scorer in the draft. Tippett (6-0, 200) has an NHL-caliber shot and scored 44 goals this season, fifth-most in the OHL. With his outstanding shot and excellent skating ability, scouts have compared him to Pittsburgh Penguins forward Phil Kessel.

The Coyotes have stockpiled skilled young forwards and now find a defenseman who can get them the puck. Makar (5-11, 180) excels offensively with the ability to skate the puck out of trouble or make smart breakout passes. He led Alberta Junior Hockey League defensemen and was sixth in the league with 75 points (24 goals, 51 assists) in 54 games. Despite playing against what some might consider lower-level competition, scouts saw him dominate. He’s committed to UMass-Amherst next season, but could be in the NHL before too long.

The Sabres got 17 goals from 12 defensemen this season; Valimaki (6-2, 204) had 19 in 60 games. Scouts see him as the prototypical modern-day defenseman, able to use his high hockey IQ to know when to take the puck and go on the attack or find the open player for a quick pass to start a breakout.

The Red Wings need to add offense and Pettersson is a highly skilled, creative forward who can play in the middle or on the wing. He spent the entire season in Allsvenkan, Sweden’s second division, and at age 18 had 41 points (19 goals, 22 assists) in 43 games. He needs to add size to his 6-2, 161-pound frame but isn’t shy when it comes to getting to the net in the offensive zone or being smart and positionally strong defensively.

Panthers general manager Dale Tallon likes to build with big, talented forwards, making Vesalainen (6-3, 207) a solid choice here. He skates well for his size, has a good shot, wins battles along the wall, and when he gets to the net, he’s strong enough to hold his position. At 17, Vesalainen already has played in the Swedish Hockey League and Liiga, and was dominant for Finland at the World U-18 Championship with 13 points (six goals, seven assists) in seven games.

Scouts love his consistency and high hockey IQ. Glass (6-2, 178) isn’t overly skilled but his smarts allow him to be in the right position to create scoring chances for himself and his teammates. His game got better as the season progressed and he was seventh in the WHL with 94 points (32 goals, 62 assists) in 69 games.

The Hurricanes have assembled a strong group of young defensemen and now need skilled forwards who can finish plays. Prior to season-ending surgery on his broken wrist in March, the 6-6, 215-pound forward had 32 goals in 50 games.

Suzuki was in the top five in the OHL in goals (45, fourth) and points (96, fifth) but his real assets are his smarts, non-stop energy and willingness to work hard in all three zones. Eventually adding Suzuki (5-11, 183) to Mark Scheifele and Bryan Little would give the Jets enviable depth through the middle.

The 5-10, 170-pound forward is an offensive dynamo who was third in the USHL with 30 goals in 52 games. He can execute at high speed and can get his shot off from all areas of the ice. With the Lightning’s top-end forward depth, Tolvanen will be allowed to develop his skills and add size to his 5-10, 170-pound frame next season at Boston College.

A bout of mononucleosis hampered Liljegren (6-0, 191) this season but he’s a smart, mobile defenseman who did well playing most of the season in the Swedish Hockey League as a 17-year-old (he turned 18 on April 30). The Islanders have done well in the past few years of finding good young forwards; now is the time to build up their defense prospects.