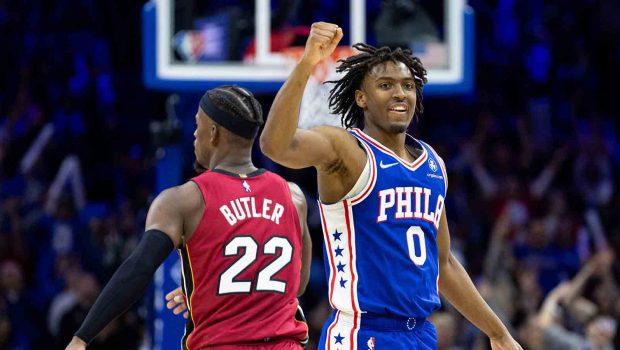 Speaking with NBA legend Vince Carter and co-host Ros Gold-Onwude on the ‘VC Show,’ Rivers lauded Maxey’s ability and his commitment to get even better.

‘He’s the most impressive young player I’ve ever had in 21 years of coaching,’ Rivers said. ‘So that’s how impressive he is.

“His work ethic, Vince, is beyond belief. Many times already this summer, at least two or three times, we’ve had to tell him to go sit down somewhere and go relax.”

Those were massive improvements from his rookie year, when he averaged 8.0 points per game and struggled with his three-point shot to the tune of just 30.1 percent.

Maxey’s tireless work ethic surely played a part in him remedying those shooting woes, and the Kentucky alum recently took his first-ever vacation, according to Rivers, even asking Rivers’ son (and Sixers development coach) Spencer what he was supposed to do on vacation.

“Vacation’s too long coach,’ Rivers recalled him saying when he returned from the trip. “Can’t do it that long.”

While Maxey’s massive shooting improvement may have surprised people outside of the Sixers, Rivers saw a guy who wasn’t missing in practice – and would start hitting shots eventually.

“I said it all year, this guy can shoot,” he recalled from Maxey’s rookie year.