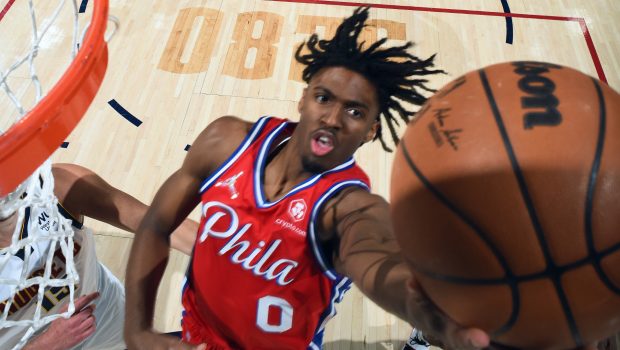 The Sixers second-year guard has kept Philly afloat during this period when COVID has taken its toll.

And last night he scored 24 points in a win over the Kings.

The national media, in this case The Athletic’s Kevin O’Connor, have noticed:

With Joel Embiid sidelined due to health and safety protocols and Ben Simmons still away from the team amid his trade standoff, Maxey has been handed the keys to offense.

Over the past seven games without Embiid and Simmons, Maxey is averaging 24.3 points on 17.6 shots per game, up from 14.2 points on 10.8 shots in his previous 10 games. Only 21 years old and in his second season, Maxey looks like the pick-and-roll shot-creator the Sixers hoped they’d get when they drafted Markelle Fultz.

Maxey gets to the basket with ease. He’s a slippery scorer inside who uses tricky layups and wrong-foot finishes to keep defenders guessing. Interior finishing has long been his best skill despite standing 6-foot-2, and this season he’s making a remarkable 67.1 percent of shots in the restricted area. The difference this season is his progress on pull-up jumpers. He can launch if defenders go under screens, and he’s comfortable getting to his stepback against slower-footed defenders.

Sustaining his high numbers will be challenging; Maxey is hitting 42.1 percent of his 3s. But even with some slight regression, I’m buying his progress. Going back to high school, Maxey has had a soft touch inside the arc and from the free throw line. Even as a rookie he shot 49 percent on 2-point shots taken off the dribble away from the rim. This season, he merely has taken that shooting success and extended it out past the 3-point line. Maxey is making 40 percent of 3s off the catch and 44.4 percent off the dribble. In recent games, Maxey is increasing his output of jump shots taken after dribbling to about six per game. Philly should feed him even more to find out what it can get out of him.

Simmons and his agency, Klutch Sports, should be watching closely. Maxey, a fellow Klutch client, has taken the opportunity sparked by Simmons’s absence and flourished, looking like a player who could be the final piece of Philly’s championship puzzle. When the Sixers drafted Fultz, their plan was to then turn Simmons into a supercharged version of Draymond Green, making plays in the open floor and being used as a screener in the half court. Nowadays, even guys like Bruce Brown and Gary Payton II can do that when surrounded by shooters. It’s the way you optimize a nonshooter.

Simmons is better than anyone who’s been offered for him in a trade. And the more Maxey excels, the easier it will be to fit him back into the lineup. If Simmons cares about winning, the Sixers have championship contender written all over them.