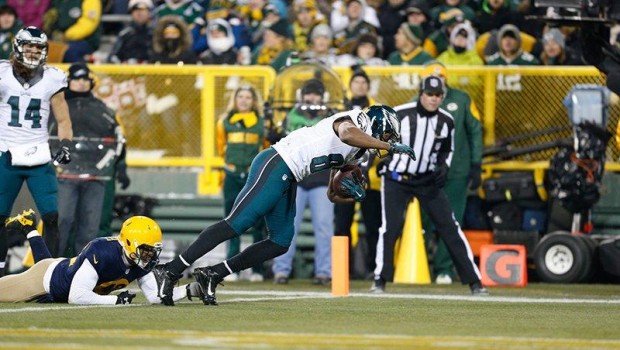 It was hard to find anything positive about the Eagles’ performance in yesterday’s 53-20 beatdown by the Packers.

But my editor insists, so here goes:

Jordan Matthews had a big day for the offense — five receptions for 107 yards and a touchdown.

Mark Sanchez had a solid stats, going 26 for 44 with 346 yards passing, two touchdowns, two picks and two fumbles — but his stats all came too late.

Aaron Rodgers ended up going 22 of 36 with 341 yards passing, three touchdowns and no interceptions for the Packers.

LeSean McCoy gained 88 yards on 23 carries in addition to one reception for 18 yards. Matthews was a leading receiver, hauling in five passes for 107 yards while adding a touchdown.

The Philly defense fell apart, giving up 367 yards passing and 110 rushing. They brought down Rodgers for one sack.

Packers running back Eddie Lacy could not be contained, putting up 69 yards rushing, 45 receiving and two touchdowns. After Rodgers, he was the top performer for Green Bay. Wide receiver Randall Cobb also had a good game with 129 receiving yards.

The Eagles are at home to take on the Titans (2-7) next week while the Packers travel to to meet the Vikings (4-6).