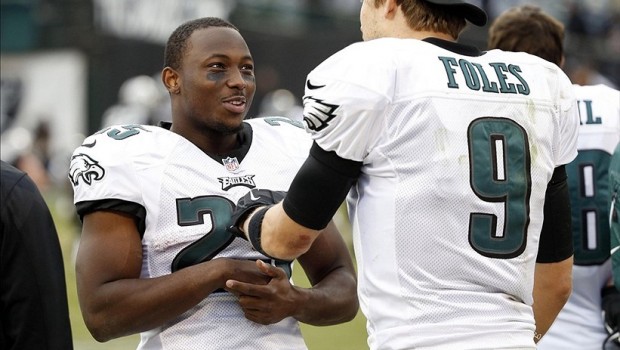 NOT THAT IT MATTERS, BUT SHADY WANTS FOLES AS EAGLES 2015 QB

If it were up to LeSean McCoy, Nick Foles would be the Eagles’ starting quarterback in 2015.

Which is a nice thought, coming from the loquacious Shady, who might keep his thoughts to himself until his own future with the Birds is settled.

McCoy said on NFL Network that Nick Folesshould remain the starter, and that players in the locker room view Foles as their team leader.

“I like Nick. The person and player that everybody thought he was, he is. There were a lot of injuries this year, Nick, obviously got injured. He gets all of the blame and he shouldn’t,” McCoy said. “I think Nick’s a good quarterback. He’s the leader of our team. Things just didn’t work out for him this year due to injury, but we’ve got his back. As a team, we didn’t play well enough to win and get into the playoffs.”

Foles was off to a mediocre start to the season when he suffered a broken collarbone on November 2, and that raised questions about whether he’s the right quarterback for the job in Philly. However, there may not be any better options in free agency, and it seems unlikely that Kelly would be able to get his old Oregon quarterback Marcus Mariota in the draft. McCoy is probably right that Foles will keep the job, even if Kelly hasn’t said so yet.