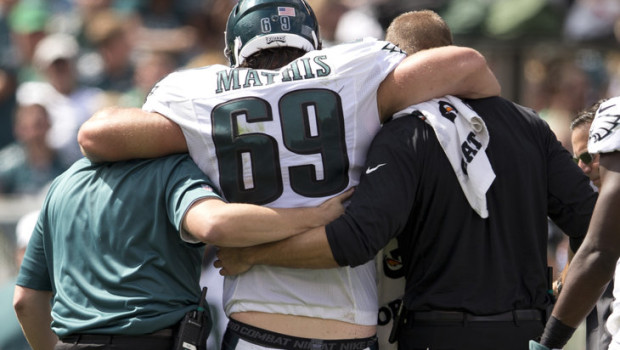 MATHIS IS IN LIMBO, BUT HE ALSO RESIDES IN CHIP’S DOGHOUSE

Maybe it’s because he was hurt last season and missed a boatload of games.

And maybe because he is paid too much, a product of Howie Boy Roseman’s largesse.

It probably all three.

The veteran guard skipped the first two weeks of the team’s voluntary workouts as he and his agent continue to work on a trade that does not appear likely to happen.

Kelly took a bit of a shot at Mathis after the draft, but actually the head coach just explained the situation. The Eagles while not trying to get rid of Mathis are not planning on giving him a raise, either.

He also said that the Birds have been trying to trade Mathis for two years and have had no takers.

That had to hurt!

And for the most part they shouldn’t.

Mathis is scheduled to earn $5.5 million this season in the midst of a 5-year, $25 million deal he signed in 2012 when then general manager Roseman was in charge of personnel.

That deal, even in its fourth year, still ranks Mathis as tied for the seventh highest paid guard in the league. That’s not bad. It’s a lot better than Mathis would have ever thought he would have gotten when the Eagles signed him off the scrap heap after he failed in Carolina, Miami and Cincinnati.

Who are the guards ahead of Mathis?

Arizona’s Mike Iupati, who left San Francisco for the desert this offseason, is No. 1, making $8 million this year as part of his new deal.

St. Louis’ Roger Saffold is second at $7.25 million (5 years, $31 million), and to be fair when he signed that deal he was still playing tackle and could always move back outside.

San Diego’s Orlando Franklin, who left Denver as a free agent, signed a five-year, $36 million deal that included a $15 million signing bonus. Like Saffold, Franklin also has experience at tackle.

Tampa Bay’s Logan Mankins, who the Bucs acquired in a trade with New England, is next at
$6.75 million.

Then comes Mathis and Green Bay’s Josh Sitton, both at $5.5 million.

The other part to the equation is Mathis will celebrate his 34th birthday in November. The only other guard on this list close to that is Mankins, who just turned 33. Evans and Grubbs are both 31 and the others are all still on the good side of 30.