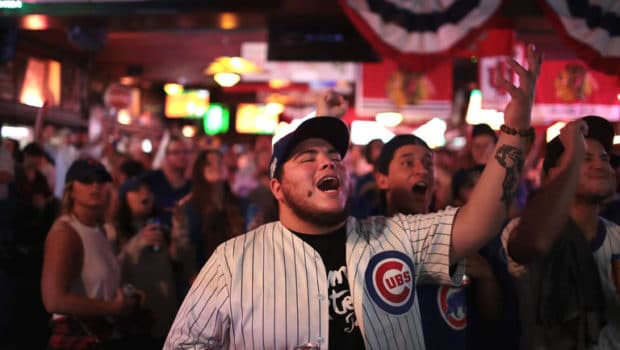 As the NFL continues to suffer through a year of plummeting TV ratings, major league baseball has come up with a formula or success:

Play a World Series with two compelling teams and make sure they get to Game 7!

That year, an average of 50.3 million people watched the Minnesota Twins beat the Atlanta Braves behind Jack Morris’s 10-inning, 1-0 masterpiece. The game was so long ago that it was called on CBS by Jack Buck, whose son Joe just finished his 19th World Series at Fox. John Smoltz, now Fox’s No. 1 analyst, started against Morris.

When the Cavaliers won the NBA championship in a Game 7 in June, 30.8 million watched on ABC in what was the league’s most-viewed game in 18 years.

“It might have been a different viewing public in 1991 without the internet and all the other options out there,” Joe Buck said. “So for anything we do in 2016 to be compared to something in 1991 tells you that this really cut through.”

For Fox, the combination of the Cubs and the Indians in a tense Game 7 was a recipe for everything going well.

It was not a shock, least of all to Fox, that a World Series involving the Cubs could generate a large audience. The network, and its cable sibling, FS1, showed all of their Cubs postseason games in prime time to capitalize on the tantalizing possibility that the team would end its 108-year-old championship drought. The strategy worked.

In the pre-cable universe, however, network television audiences were often enormous. The 1978 World Series between the Yankees and the Los Angeles Dodgers averaged 44.3 million viewers, with 50.6 million watching the decisive sixth game. Two years later, 54.9 million watched the Phillies beat the Kansas City Royals in six games on NBC.