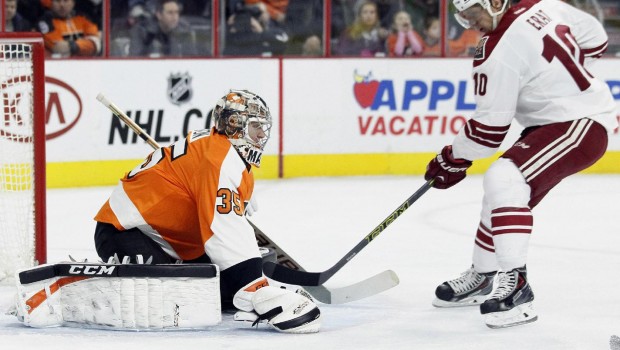 It was a messy way to win a game, but in Flyers World they’ll take messy any time!

Coach Craig Berube pulled starter Ray Emery in favor of Steve Mason, who made 22 saves in regulation and overtime before denying three Coyotes in the shootout to help the Flyers to a 4-3 win Tuesday night at the Wells.

The Coyotes scored two goals on four shots against Emery 5:50 into the game, and that was enough for Berube to make a change in net.

Mason, in uniform for the first time since sustaining an upper-body injury in the first period of a game Jan. 10 against the Boston Bruins, had said the plan was for him to take part in the morning skate Tuesday, practice today and start tomorrow against the Winnipeg Jets.

Then the plan changed.

“I just made a change,” Berube said. “Felt we needed something to boost us, give us some life.”

Wayne Simmonds scored the only goal of the shootout and also had a goal in regulation. R.J. Umberger and Michael Del Zotto each had a goal for the Flyers (20-22-7).

Matin Erat had a goal and an assist for the Coyotes (16-25-6), who lost their seventh straight (0-6-1). Connor Murphy andTobias Rieder also scored. Goalie Mike Smith made 39 saves through overtime, and then stopped two of three shooters in the tiebreaker.

The message behind Berube’s decision to put Mason into the game wasn’t so much a reflection of Emery’s poor play, but instead a move to get the attention of the Flyers’ 18 skaters.

“I think that was more indicative of the team than Ray,” Simmonds said of the change in net. “More of a wake-up call for us. We were sleeping on our feet there. We pulled it around, we started playing better hockey and we got results.”

After early goals by Murphy and Erat, the Flyers scored three straight goals, starting with Simmonds’ power-play goal at 9:02 of the first. It was his 17th of the season but first in nine games.

Umberger tied the game 2-2 at 13:55 of the second when he beat Smith up high, and then Del Zotto scored a nice goal off the rush, beating Smith with a shot that pinged off the underside of the crossbar with 1:01 left in the second.

The Coyotes tied the game 23 seconds later when Rieder finished a breakaway by scoring over Mason’s glove.

The goal seemed to give the Coyotes some momentum heading into the third period, but they couldn’t beat Mason again.

“That’s a big, big goal late in the second period, especially when we’ve given up a couple and let them right back into the game,” Coyotes coach Dave Tippett said. “So huge goal for us. I thought we played solid in the third, and too bad we couldn’t get the extra point in the shootout.”

The Coyotes’ Sam Gagner, who missed the net on odd-man rushes in the third period and overtime, shot wide of the net to start the shootout, and then Smith stopped Jakub Voracek, the NHL scoring leader.

After all-stars Oliver Ekman-Larsson of the Coyotes and Claude Giroux of the Flyers each was stopped on his chance, Mason made a nice save on Antoine Vermette. Simmonds, the Flyers’ third shooter, skated through the middle of the ice, slowed down in the slot, and when Smith dropped Simmonds shot over him for the winner.

It’s the Flyers’ second shootout win this season, and Simmonds has scored the deciding goal in each.

“Kind of the same move [Tuesday] as I did the last time [Jan. 6 against the Ottawa Senators],” Simmonds said. “Kind of froze him, and I had a lot more of the net.”

After losing 10 straight shootouts, a stretch that dated to the middle of last season, the Flyers have won two in a row.

“With what’s happened in the past year and a bit in the shootout, to have some success the last two times is nice,” Mason said. “We put the work in recently, which we touched on last time we won in the shootout. It’s nice to get rewarded for that, because it’s been an Achilles heel for this hockey club, cost us points.”

The win also was the Flyers’ eighth in alLeague-high 32 games when allowing the game’s first goal; they’ve allowed the game’s first goal in 12 of their past 15 games, and their 4-8-0 record in that stretch is one of the reasons they’re 10 points out of the second Eastern Conference wild-card spot into the Stanley Cup Playoffs. It’s also what makes their come-from-behind win Tuesday so important to their flickering playoff hopes.

“We have what, 33 games left now?” Umberger said. “There’s no time to not be ready. Every point matters right now. That was the message to get going. Mason answered the bell. He lifted the team. He made some big saves when he got in there.”