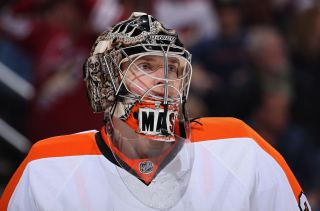 Aside from getting his career as a bonafide No. 1 netminder back on track, his performance also netted him a handsome three-year, $12.3 million deal — $4.1M annually — and cemented him as Philly’s go-to guy for the foreseeable future.

“If you look at this season in a nutshell, he was good when the team was real bad early in the year,” then-Flyers GM Paul Holmgren said of the deal. “And the last little while, as the team’s gotten better, I think Steve has played up and down a little bit. We expect him to get better over the next three-plus years with the team and grow with the team.

“He’s a good goalie, and we believe he’s going to get better. That’s why we did what we did.”

That last part is key. The Flyers expect Mason to get better over the life of his contract and next year, the first of the extension, he’ll probably need to be.

Defensively, Philly has some red flags. The club finished 20th in the NHL in goals allowed (2.77 GAA), led the league in penalty minutes and was shorthanded the second-most times (316), second only to Ottawa. While the Flyers’ solid penalty kill bailed them out routinely — the PK finished seventh in the NHL last year, at 84.8 percent — a couple of key performers from the unit are now out of action: Kimmo Timonen (blood clots) and Adam Hall (signed in Switzerland), who finished third and fourth on the team in total shorthanded TOI last season.

There are two significant problems: 1) the group doesn’t feature a clear-cut No. 1, “stud” that most elite teams tend to employ, and 2) it doesn’t have a ton of depth. Prior to signing Michael Del Zotto, Philly was looking at a top-six comprised of Mark Streit, Andrew MacDonald, Braydon Coburn, Luke Schenn, Nicklas Grossmann and Nick Schultz. Del Zotto helps the depth out a bit, and the Flyers will pray their health on the back end mirrors last year’s (it doesn’t garner a lot of attention, but Philly’s blueline went almost injury-free last season. Streit, Coburn, Schenn, Timonen and Grossman combined to miss just 12 games.)

Hextall is trying to look at the situation optimistically as well.

“I like our defense,” he told NJ.com. “I’ve said it time and time again. We maybe don’t have that top guy, that No. 1 guy, but probably 20 teams in the league say the same thing. We’re going to go with the guys we’ve got.”

All of this, of course, circles back to Mason. As the last line of defense, he fared well last year and shone in his first playoff action in five years, posting a .939 save percentage over the final five games of Philly’s opening-round loss to the Rangers. But now, he’ll need to show year-to-year consistency — something that was an issue in Columbus — and carry the weight of expectation. When he arrived in Philly, Mason was a reclamation project playing on a cheap deal. Now, he’s one of the NHL’s 20 highest-paid goalies and will be looked upon to backstop the Flyers into a second straight postseason.

The last time Mason faced similar expectations was as a Blue Jacket, following a rookie year in which he won the Calder and finished second in Vezina voting. Things went south after that, and the Flyers hope they’re not in line for a repeat performance.