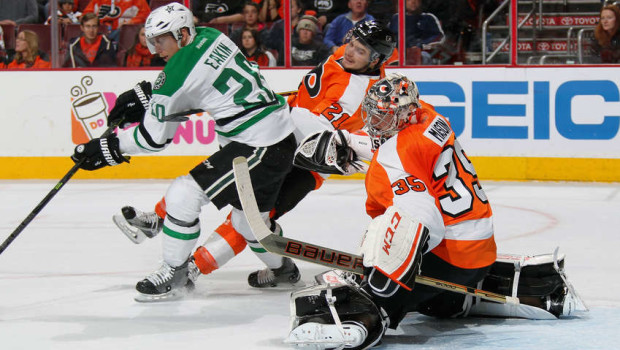 MASON BACK IN GOAL AS FLYERS FALL TO STARS 2-1

One could make fun of the fact that the Flyers got beat last night by a guy who had both his hips repaired five months ago.

But that would be in bad taste.

Dallas Stars captain Jamie Benn and his hips had a goal and an assist to lead the Dallas Stars (5-1-0) to their fourth straight win, a 2-1 victory against the Flyers (2-2-1) at Wells .

Benn’s six goals lead the NHL, and his 10 points are tied for the League lead. He has at least one point in all six games, including three straight multipoint performances.

Seguin also had a goal and an assist, and goaltender Antti Niemi made 34 saves in his first game since Oct. 10.

It was Niemi’s first game in Philly since he started the Stanley Cup-clinching Game 6 of the 2010 Final for the Chicago Blackhawks.

The Stars killed all four Flyers power plays, including one with 6:09 left in the third period.

Sean Couturier scored for the Flyers, whose Steve Mason was back in goal after missing the past two games because of a personal issue — he made 30 saves.

“It got better as the game went on; felt a little more comfortable,” Mason said. “They’re a talented team, so it was kind of trial by fire there. It was nice to get back out there and get my feet back under me. Just continue to build off of this.”

Benn, last season’s Art Ross Trophy winner, had one hip repaired in late April and the other in early May.

“I feel pretty good,” Benn said. “Obviously, I did what I had to do this summer to be ready for the season. Was a lot of hard work. And it was pretty frustrating at times. I was just doing the right things this summer to get myself ready. I feel good out there.”

Benn said his offseason goal was to be at full strength to start the season, and he certainly looks like he’s gotten there.

“I think I had the mindset all summer of pushing myself so come Game 1 I could go 100 percent and be the player I wanted to be, and I did that,” he said.

Benn said the constant soreness in his hips would come after games, and missing the Stanley Cup Playoffs allowed him the opportunity to have each hip surgery with ample time to recover. Now, he says he feels looser in his hips than he did before.

“I feel like I’m a little more flexible in areas and that helps me,” he said. “You get a little extra length in your stride, in your skating. I feel good out there.”

“I think because he’s had so much time to work on those hips since the surgery he’s even stronger and quicker out there,” he said. “Happy to see him playing well.”

Benn scored the Stars’ second goal when he capped a 2-on-1 rush with linemate Patrick Sharp. After helping to create a turnover inside the Dallas blue line on the first shift of the second period, Benn carried the puck down the left side of the Philly zone, looked off Sharp and fired a shot that beat Mason past his glove 11 seconds into the second period.

In the final minute of the first period, Benn got to a bouncing puck and pushed it ahead to Seguin, who sent a fluttering shot between Mason’s left arm and his body.

Benn had three shots on goal. He played in all situations and led the Stars with five hits and their forwards with 20:27 of ice time.

As good as Benn is playing, coach Lindy Ruff thinks there’s another level he can reach.

The two-point night extended Seguin’s scoring streak to five games and tied him with Benn for the League lead.

But most important for the Stars was the victory, their fifth of the season. Last season, they didn’t get their fifth win until their 15th game, and that slow start was a reason they missed the playoffs.

“It has been our message since the last six months really, since we lost out and we didn’t make playoffs,” Seguin said. “Our whole last year was based on how bad our start was. We were climbing out of a hole and playing great hockey, kind of a stretch after Christmas and the All-Star Game, trying to climb out of a hole. So, it is huge.”

The Flyers got within a goal in the third period on Couturier’s first goal of the season, which stood after a replay review showed no distinct kicking motion. They outshot the Stars 15-6 in the third period, but the players felt they took too long to get into the game, their first since defeating the Chicago Blackhawks 3-0 on Oct. 14.

“I thought we fought the puck a bit in the first two periods,” Flyers forward Ryan White said. “We were working hard, we just weren’t working that smart. I thought it came together in the third period when we simplified everything and everyone was able to read off each other. It made us look a little bit faster out there. There’s no excuse. We’ve got to have a better start and we know that.”