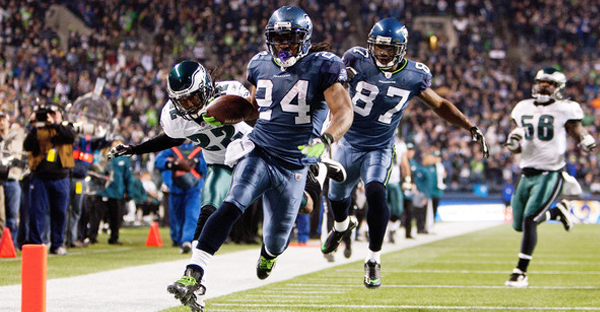 MARSHAWN LYNCH RETIRING? EAGLES HOPE HE DOES SO TODAY!

The Eagles are wondering of Seattle Seahawks running back Marshawn Lynch might consider moving up his rumored retirement:

Say, this Saturday, a day before the Seahawks come to the Linc for a 4:25pm showdown with the Birds.

According to a report from NFL Network’s Ian Rapoport, Lynch is mulling the idea of retiring from football at the close of this, his eighth NFL season.

“According to sources with direct knowledge of Lynch’s thinking, the 28-year-old is weighing the possibility of retiring after this year, saying goodbye to football on his owns terms,” Rapoport wrote on Sunday. “He’d leave the football world confused and wanting more, though that’s what he often does.”

This isn’t the first time news has leaked about the star running back contemplating retirement, but while Lynch is widely assumed to be unhappy with his contract status with Seattle, health concerns may be at the top of Lynch’s list of reasons for potentially walking away from the game, according to Rapoport.

“He’s missed just one game in the last four years, but he has battled back pain throughout,” Rapoport wrote. “Thanks to countless hits over the course of his career, the cartilage in his spinal cord is compressed, which brings him discomfort.”

Lynch has been a headline magnet this season, be it for his six-figure fine from the NFL after failing to meet media obligations or his supposedly tenuous future with the defending Super Bowl champions.

Reports surfaced in October that the 28-year old running back was not expected back with the Seahawks in 2015 due to his $8.5 million salary-cap hit coupled with the organization’s exasperation with his sometimes bizarre behaviour. But head coach Pete Carroll refuted that notion on Nov. 21, saying that he wanted Lynch to play for Seattle “for as long as he can play.”

The off-the-field issues haven’t stopped Lynch from delivering for the Seahawks this season. He ranks third in the league with 956 rushing yards and tops in the NFL with nine touchdowns on the ground and 12 combined rushing and receiving scores.

Rapoport’s report does mention another option for Lynch next season could be following offensive line head coach Tom Cable out of town if Cable landed a head-coaching job.