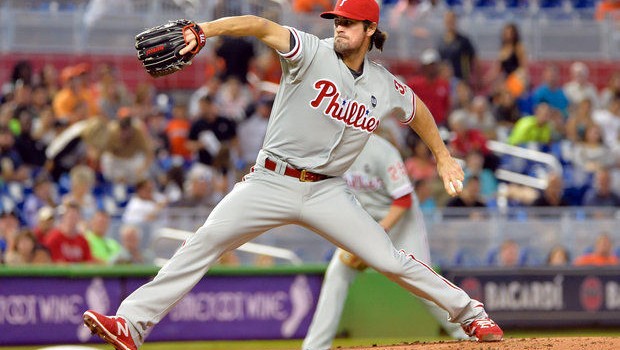 The meme that has been built up in the Philly media is:

If only Cole Hamels could get more support his lifetime record while pitching for the Phillies would be a lot better than 109-86.

That is beginning to sound hollow this season. Hamels’ 2015 record after Saturday’s 7-0 loss at Miami is 1-3 with a 4.14 ERA and eight home runs allowed, most of any pitcher in the National League.

Martin Prado homered and drove in four runs, leading Dan Haren and the Marlins over the Phillies Saturday.

The Marlins won for ninth time in 10 games and sent Philly to its fifth straight loss.

Haren (3-1) gave up four hits in six innings. He walked none and struck out four.

Prado hit a three-run homer off Cole Hamels in the second inning and added an RBI double in the sixth.

Prado is hitting .313 with two homers and nine RBIs in 67 at-bats against Hamels, who is 9-15 lifetime vs. the Marlins.

Gordon also took away a hit away from Carlos Ruiz with an over-the-shoulder catch running into shallow center field.

Ichiro Suzuki of the Marlins was called out on a bizarre play in the second.

Suzuki was on first base when Adeiny Hechavarria hit a bloop single to right field. Suzuki ran to second, touched the base, and then retreated a few steps back to first in case the ball was caught.

When the ball dropped in, Suzuki darted to third. The Phillies appealed the play and he was called out for not retouching second base on his way to third.

Marlins manager Mike Redmond came out to discuss the call with second base umpire Clint Fagan, but was not able use his instant replay challenge after a failed try in the first on a play at the plate.