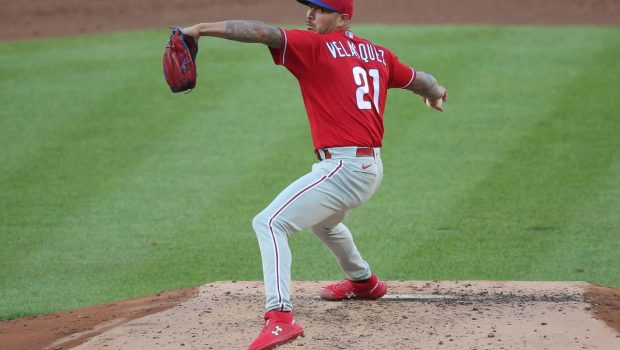 MARLINS EXPOSE PHILS VELASQUEZ FOR MINOR LEAGUER THAT HE IS!

The Phillies left Citizens Bank Park yesterday after having been bludgeoned by the Marlins 11-6, wondering what went wrong in their first three games of this 2020 season.

Their pitching isn’t as good as they thought!

Brian Anderson and Miguel Rojas each hit three-run homers to help Miami overcome a 4-0 deficit and a COVID-19 scare.

Jose Urena, Miami’s opening day starter in 2018 and 2019, was bumped from his start about 90 minutes before the first pitch. The Marlins did not disclose the reason.

Miami had other players unavailable: Garrett Cooper and Harold Ramirez also were out of the lineup after playing in the first two games of the season-opening, three-game set against the Phillies. Again, the Marlins did not immediately say why the players were not in the lineup. Marlins catcher Jorge Alfaro was placed on the injury list with an undisclosed ailment at the start of the series.

The Marlins rallied and made Vince Velasquez look like the minor leaguer that he really is.

Bryce Harper’s first homer of the year, a three-run shot in the first, helped stake the Phillies to a 4-0 lead. The ball rattled around the right field seats where Harper again took a customary bow to open the game without a fan in sight.

Jesus Aguilar hit a solo shot off Velasquez in the second and Rojas followed with a three-run blast that tied it 4-all. Velasquez, who picked off two runners, lasted only three innings.

Down 5-4 in the fourth, the Marlins again rallied, sparked by Rojas’ RBI single against Cole Irvin and Magneuris Sierra’s go-ahead single against a drawn-in infield for a 6-5 lead.

Anderson hit a three-run homer in the fifth to make it 9-5 and give the Marlins, who lost 105 games last season, a needed cushion.

The Marlins pitched out of bases-loaded jams in the fifth and sixth to preserve the lead. Jeff Brigham held the 9-5 lead in the fifth when he retired Jean Segura on a popup and Jay Bruce flied out to right.

Yimi Garcia, wearing No. 93 and in his second big league appearance, came on in relief in the sixth in a 10-6 game. He walked Harper to load the bases, then retired J.T. Realmuto and Didi Gregorius to escape the jam.

Miami’s good vibes from taking the series were surely dampened by the potential health scare that could keep key players out of the lineup for an undetermined length. The Marlins were scheduled to head home to start a two-game set with Baltimore on Monday, though potential coronavirus scares will likely keep them in Philadelphia overnight.