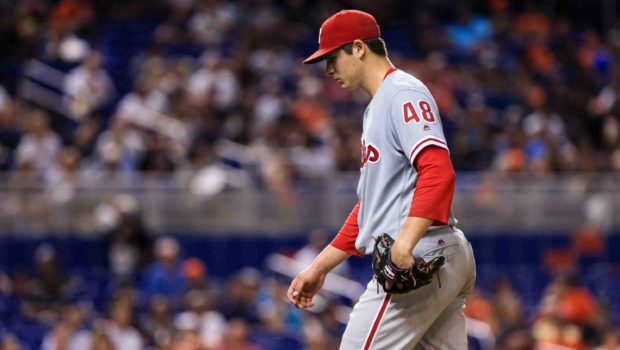 MARLINS BREAK OUT TO BEAT PHILLIES 5-0

Phillies’ right-hander Jerad Eickhoff (6-12) allowed one run and five hits in seven innings. He struck out eight and walked one.

Stanton’s two-out RBI single in the sixth snapped a 24-inning scoreless streak for Miami. He also had a ground-rule RBI double in the Marlins’ four-run eighth.

“Big time right there with two hits,” Marlins manager Don Mattingly said. “The first one obviously was kind of relief from the standpoint that we hadn’t scored in a while and you feel like hopefully there’s a chance we would open it up a little bit and then the next one opens up the floodgates for us and gave us a little breathing room.”

Adeiny Hechavarria tacked on a two-run single in the eighth, and Miguel Rojas had an RBI double.

“We needed to get some energy going,” Stanton said.

Ichiro Suzuki made his first start in five games and went 1 for 5, giving him 2,997 career hits. He also stole a base and scored a run.

“This is not a guy that’s just treading his way to 3,000,” Mattingly said. “This guy has been helping us big-time all year.”

Suzuki had an extra-base hit taken away in his first at-bat when Peter Bourjos made an impressive catch in right-center. But Suzuki had a leadoff single to left in the eighth.

“It livened up the place up a lot when he got that hit so it was definitely a big help to us,” Stanton said.

Koehler (8-8) also beat the Phils in his last start, when he allowed three runs, one earned, in eight innings. He is 2-1 with a 1.29 ERA in four starts against the Phillies this season.

Phillies’ right-hander Jerad Eickhoff (6-12) allowed one run and five hits in seven innings. He struck out eight and walked one.

“The only thing positive I can say about this game I thought Eickhoff was outstanding,” Phillies manager Pete Mackanin said. “He hit his spots and pitched like a pitcher should until the end. I’m very happy about that.

The Phillies’ best opportunity to score was in the sixth inning. They put two on with one out, but Koehler was able to get out of the jam with two popups.

“He’s impressed me because I’ve seen him in the past and I’ve been unimpressed,” Mackanin said, “but these last two times, we’ve helped him out. … Swung at too many bad pitches.”

Bourjos (right shoulder) left in the second inning after crashing into the outfield wall on the catch he made on Suzuki. “I’m sore right now,” Bourjos said. “I’ll see how it feels in the morning. There were no fractures so that’s good news. It’s just sore and stiff right now. In a few days out, hopefully it’s doing better.”