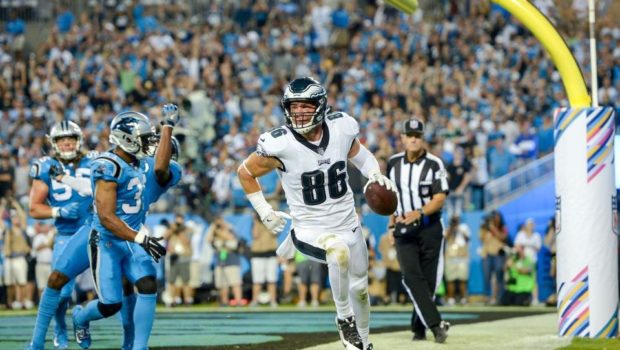 MARK OF A GREAT TEAM! EAGLES GET CONTRIBUTIONS FROM EVERYONE!

The Eagles went into North Carolina last Thursday on a short week and beat the Panthers 28-23, sending a definite message around the NFL for all to see:

They are for real and mean business through 6 weeks of the season as they moved to 5-1 on top of the NFC East!

Defensive tackle Fletcher Cox made his return to the starting lineup and gave the Birds’ D-line much-needed push up the middle all night long, making Panthers QB Cam Newton more skittish with every hit.

Cox bum-rushed one of his lineman right into his lap, forcing an interception by Rasul Douglas, setting up the Eagles first touchdown.

Birds QB Carson Wentz continued his great play, looking more like a 5-year vet instead of a second-year player finding his way!

Kid Carson threw 3 TD’s, two strikes to tight end Zach Ertz (above). Another was a quick completion to Nelson Agholor who quickly bolted to pay dirt for a 24-yard TD. Wentz went 16-30, 222 yards with a 110.7 passer rating!

Linebackers Mychal Kendricks and Nigel Bradham were all over the field making key tackles all night, 15 for Kendricks, 10 by Bradham, the best night for this LB corps all season long on the big stage for this very important NFC conference victory!

With this impressive win, the Eagles are being put in elite team class by the national media, ranked 2 or 3 latest power rankings this week, even some uttering they are the team to beat in the NFC!

It’s just 6 games into the season, but the Birds are sitting pretty with 3 straight home games on the schedule. The Redskins will visit Lincoln Financial Field next Monday night, October 23rd looking for revenge after being beat on opening day, 8:30pm/ESPN