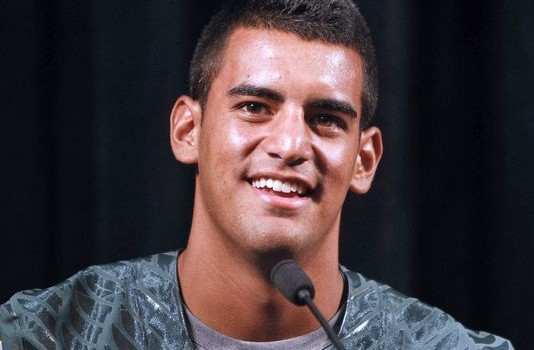 And he didn’t come all the way east because Eagles’ coach Chip Kelly missed his pro day back in Eugene, Ore. — he was busy signing DeMarco Murray.

Mariota was speaking at the 78th Maxwell Awards gala, but naturally he was asked about the possibility his former coach, Kelly, would still move up in the draft to bring him to Philly as the Eagles’ QB of the future.

“I wouldn’t doubt it,” Mariota said. “But Coach Kelly and the Eagles are going to what is best for their team, and we’ll see what happens.”

Mariota accepted a Maxwell award as the College Player of the Year from last season, when he threw for 4,454 yards, 42 touchdowns and four interceptions while also rushing for 770 yards and 15 additional touchdowns.

The Heisman Trophy winner is projected to go in the top 10 picks of the draft, but that didn’t stop the Eagles, who are slotted at No. 20, from being one of the three teams he met with on Thursday at the University of Oregon pro day in Eugene.

“I had kind of an informal meeting with the quarterback coach (Ryan Day),” Mariota said. “It was a breakfast … kind of an introduction meeting.”

Kelly was not at the pro day or the meeting, but Mariota said that he keeps in touch with his former coach, who recruited him to Oregon. Mariota’s relationship with Kelly is the main reason people believe the Eagles will try to trade up for him.

Kelly has done his best to silence any talk that the team will trade up. He acquired quarterback Sam Bradford in a trade Tuesday with the St. Louis Rams, but Mariota doesn’t believe that would be a deterrent to a maneuver to move up and select him.

“Not at all,” Mariota said. “Whatever their plan is, I’m sure they’ll be able to execute.”

Mariota said he also has remained especially close with Eagles receiver Josh Huff, who is one of many former Oregon players now on the Eagles’ roster.

“Josh and I have become close friends,” Mariota said. “We have kept in touch throughout this entire deal.”

Do they talk about a possible reunion in Philadelphia next season?

“Of course,” Mariota said. “I think everybody jokes with me about it. We’ll see what happens.”