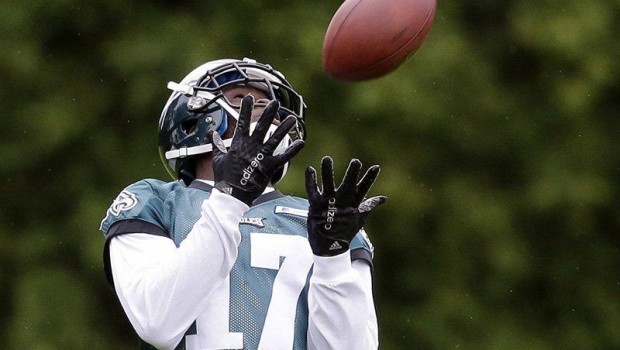 EAGLES HOPE AGHOLOR WILL WASH AWAY MEMORIES OF 2014 TOP PICK!

You want to know how much pressure is on Eagles No. 1 draft choice Nelson Agholor, a top-notch wide receiver from USC?

The 2014 top pick couldn’t get on the field very much — just 68 snaps — and became a punch line instead of a valued rookie linebacker.

Agholor, the 20th overall pick, should have an immediate impact and thrive in Chip Kelly’s offense according to an executive in personnel for another team.

“He should be good, real good,” one NFL executive told NJ.com about Agholor. “I’d bet on him.”

“He’ll come in and produce right away,” the executive said. “He has the right mentality and just a great approach to the game. He’s going to help them. And in that offense, he’ll put up numbers.”

Jeremy Maclin, who left as a free agent for Kansas City and a reunion with former head coach Andy Reid, led the Eagles with 85 receptions, 1,318 yards and 10 touchdowns last year.

Agholor could help make up some of those numbers along with second-year men Jordan Matthews and Josh Huff. Veterans Riley Cooper and Miles Austin round out a very good group of wide receivers.

“I look at Matthews as a good receiver, very solid in every aspect, but not a No. 1 guy,” the executive said. “Agholor is a No. 1. So now Matthews won’t have that pressure on him. They’ll be good together.”

Huff, bothered by a shoulder injury early in the season and then seemingly overwhelmed caught eight passes for 98 yards as a rookie. He was very impressive through the spring OTAs and minicamp.

A year ago Maclin played 87 percent of the offensive snaps and Cooper, who the coaching staff likes for his blocking ability, played 81 percent. Matthews, primarily in the slot, was on the field 65 percent of the time. It then dropped down to Huff’s 18 percent.