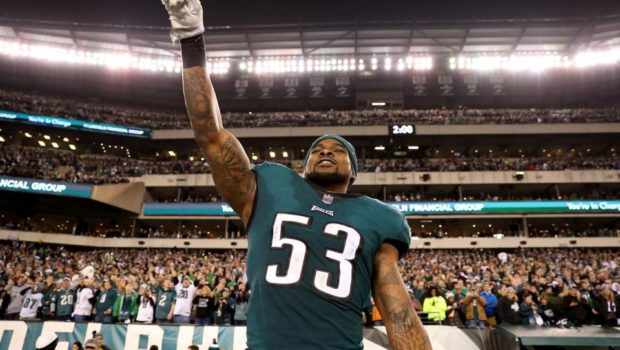 In case you have been living in a cave in Russia, you might have missed the Eagles’ action during the first week of NFL free agency.

The defending Super Bowl champion Eagles will have a new look defense in 2018 after the loss of two members of their defensive front in Vinny Curry and Beau Allen and cornerback Patrick Robinson.

The re-signing of Nigel Bradham (above) brings back one of the league’s best coverage linebackers in a 4-3 alignment as the veteran allowed a reception every 14.3 snaps he spent in coverage, a league-best among 4-3 OLBs.

Replacing Robinson should head to the top of the offseason wish list in Philly as slot defenders have become increasingly important and Robinson’s play from an inside alignment was a revelation in 2017.

The offense remains relatively intact with the hopeful return of Carson Wentz and Jason Peters at left tackle come opening day. Adding a playmaker to the mix or added offensive line depth can be achieved in this deep draft class at both positions, and something we’ll likely see in April.