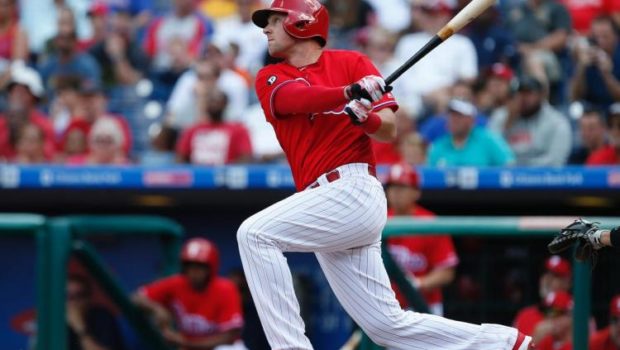 HOW MANY HOMERS WILL RHYS HOSKINS HIT IN TODAY’S TWINBILL?

It’s Not Always Sunny in Philadelphia.

As yesterday’s drencher proved quite well.

The Phils and Braves will start today just after noon at the Bank after last night’s game was called off.

Rhys Hoskins has been an August sensation for a Phillies team long out of the pennant race. Hoskins has a 10-game hitting streak (.395, 15 for 38) and has an RBI in six straight games. His 25 RBIs in August are the most by a Phillies rookie in a month since Willie Montanez had 29 in June 1971.

Hoskins failed to homer Monday night, ending his streak at five straight games. But he is the fastest ever to reach 11 home runs, doing it in 18 games and 64 at-bats.

He has two chances to end August with the best month by a rookie in team history. The Braves and Phillies will play a single-admission doubleheader today. The first game will start at 12:05 p.m. EDT and all gates will open at 11:05 a.m.

The Phillies, winners of two straight, have the worst record in baseball. The Braves have lost three in a row and seven of 10.

The Phils send Jerad Eickhoff to the mound against R.A. Dickey in the opener. Mark Leiter gets the start against Atlanta’s Julio Teheran in the second game.