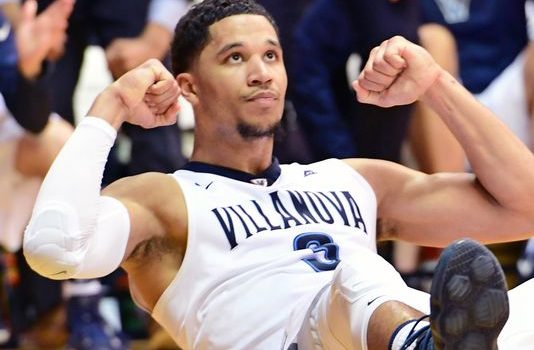 The top-ranked Villanova Wildcats are the furthest thing from a one-man show.

But if you have watched their first 11 games this season you could easily get that impression.

“Josh Hart everyone!” teammate Kris Jenkins yelled as the Wildcats entered the media center after their 78-57 win last night over Temple at the Pavilion.

Hart raised his arms in triumph.

“The guy who made the shot right behind me,” Hart said.

Jenkins’ national title game-winner earned Villanova a trip to the White House. “If President Obama’s here, I wouldn’t mind too much,” Hart said.

Hart shook off a slow start to score 26 points and lead No. 1 Villanova to its 17th straight win.

Already the top team in the country, the Wildcats (11-0) again staked their claim as the best in Philly. The Wildcats romped to their 18th straight Big 5 victory, and finished 4-0 this season against the Owls, Saint Joseph’s, Penn and La Salle. The Wildcats fattened their season record against Philly teams and haven’t lost any game since they fell to Seton Hall in the Big East championship game.

National championship game star Daniel Ochefu, now with the Washington Wizards, rallied the crowd before tipoff and Lowry was honored with a framed Team USA jersey in his return to campus.

Hart bypassed a shot at the NBA and returned for his senior season to improve his draft stock and help the Wildcats become the first repeat champions since Florida in 2006-07.

He missed his first five shots after missing four total shots in a 37-point effort last week against Notre Dame. He hit a runner at the first-half buzzer to spark a sensational second half: Hart made consecutive 3s that made it 49-31 and blew the game open.

Hart was about as well-rounded offensively as any AP College Basketball Player of the Year candidate this season. He attacked the rim and converted three-point plays and absolutely dominated when needed against a Temple program with a recent history of knocking off nationally ranked Wildcat teams.

He scored a whopping 22 points over a 9-minute stretch that sent the crowd into a frenzy.

Yeah, but the Owls sure did.

The Owls (7-4) played little like a team that knocked off two straight Top 25 teams to win the NIT Season Tip-Off and were the latest team knocked silly by the Wildcats. They had 12 turnovers on 31 possessions in the first half and had six turnovers and were held without a point during one 10-possession stretch.

Temple coach Fran Dunphy was a co-captain at La Salle and helped the Explorers to a 23-1 record in 1969 under coach Tom Gola. He coached the Owls and Penn to multiple NCAA Tournaments. He saw Jameer Nelson and Delonte West lead Saint Joseph’s to a near-perfect season.

Dunphy has never seen a city program rolling like the Wildcats.

“It’s hard to argue that they’re not the best grouping of guys that have had the best four-year career,” he said. “Besides their name, they have national champion. That’s pretty impressive.”

The Owls had already defeated two Top 25 teams this season and received votes in the poll. But Temple stumbled at home against George Washington and the loss to the Wildcats has stalled their momentum. The Owls had their lowest point total in the first half this season. Shizz Alston Jr. led the Owls with 12 points and Daniel Dingle had 11.

“They did a great job defensively but I felt like we had a great opportunity to make shots we didn’t make,” Dingle said.

The Wildcats won their 18th straight Big 5 game. They are 4-0 each of the last four seasons in the Big 5. Hart, Jenkins and Darryl Reynolds are the first senior class in the 60-year history of the Big 5 to go unbeaten.

“We’ve been part of some great teams with some great players,” Jenkins said.

Jalen Brunson scored 13 points and Jenkins and Eric Paschall each scored 12. Brunson added six assists as he has quietly emerged as the stout point guard the Wildcats envisioned.