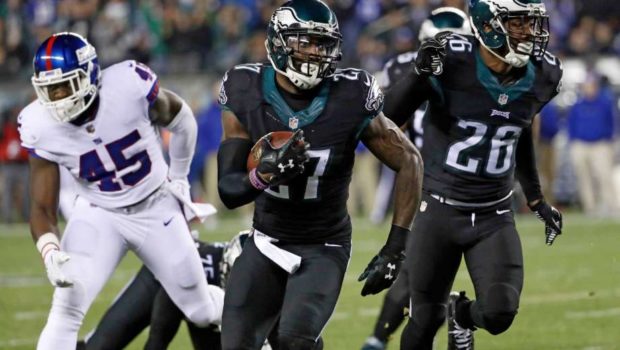 Not so fast, Big Blue!

Malcolm Jenkins had the second two-interception game of his eight-year career, returning one for a touchdown, and the Eagles snapped a five-game slide by beating the Giants 24-19 last night at the Linc.

The loss handed Dallas the NFC East title — and home-field advantage throughout the conference playoffs.

It also put the Giants (10-5) in a more difficult spot for ending their four-season playoff drought. They still own the top wild-card position heading into their finale at Washington.

New York can still get in this weekend if Detroit, Green Bay, Tampa Bay or Atlanta loses.

Carson Wentz threw a touchdown pass to Nelson Agholor, then returned from being examined for a concussion in the fourth quarter to guide a drive to Caleb Sturgis’ 41-yard field goal. After New York’s Robbie Gould made his fourth field goal, the Birds (5-9) held on downs with just under two minutes remaining.

The Giants got the ball back with 1:31 left and Terrence Brooks intercepted to clinch it with 5 seconds to go.

Eli Manning was inconsistent with his throws all night. On Jenkins’ second interception, the throw was woefully short.

Indeed, the Giants came up short because they fell behind early and didn’t catch up.

Right tackle Lane Johnson’s return from a 10-game suspension paid dividends immediately. Twice Johnson wiped out the left side of New York’s defensive line, with his block helping spring Darren Sproles for a 25-yard touchdown run for a 7-0 lead.

It was 14-0 1:28 later when Manning’s short pass to Will Tye was way too soft. Jenkins cut in front of the tight end, then romped down the right side for a 34-yard score.

It was that way all night.

Gould’s 35-yard field goal brought the Giants closer. Then Wentz found the seldom-used Agholor wide open for a 40-yard touchdown and a 21-6 edge.

Manning finally found his touch on the last drive of the half, with a gorgeous 29-yard connection to Victor Cruz keying an 84-yard mark. Shepard slipped past Jenkins’ bump at the line to score from 13 yards for a 21-13 deficit.

It was all field goals in the second half — and some more imprecise throws by Manning. He finished 38 of 63 for 356 yards and three interceptions. Beckham had 11 catches for 150 yards.