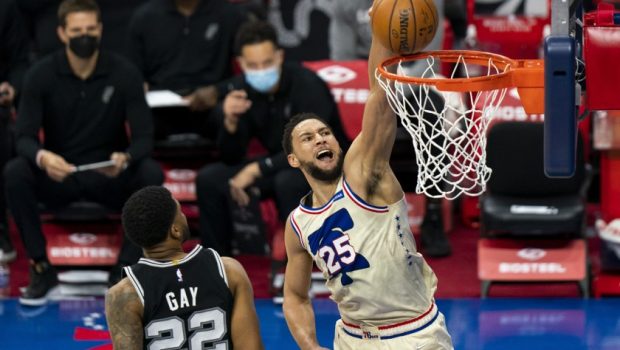 MAKING UP FOR LOST JOJO, SIXERS LEAVE SPURS IN THE DUST!

Tobias Harris had 23 points and Seth Curry 21 as the Sixers won their first game since Joel Embiid was lost with an injury, beating the San Antonio Spurs 134-99.

“We’re a great team when we have everybody,” Harris said. “This team needs everybody.”

Embiid is out at least two weeks with a bone bruise on his left knee.

So the Sixers have to make do without the 29.9 points and 11.5 rebounds in Embiid supplied in 31 games until he was injured Friday at Washington.

The 76ers welcomed back Ben Simmons after he missed the first two games after the All-Star break because of COVID protocols. Simmons and Embiid were set to play in the All-Star game only to learn the night before they were flagged for contact tracing. Though neither player tested positive for COVID-19, the barber they visited did.

Simmons had 14 points and nine assists in the romp and the oft-maligned guard for his inability to shoot beyond 15 feet — 4 for 31 lifetime on 3s — has a defender in San Antonio Spurs coach Gregg Popovich.

“It would enhance his game, obviously. That can’t be argued with,” he said. “He’s so elite already, who gives a damn if he can’t shoot.”

Simmons didn’t need to flex his long-range skills in a game the Sixers largely dominated — and their first one in Philly with fans since the pandemic.

“We missed you,” Harris told the crowd before the game. “We look forward to seeing you guys in the second half of the season and into the playoffs.”

The crowd cheered and was energetic for most of the game — breaking out a familiar anti-ref chants when calls went against the home team — waving rally towels and dancing to the Carlton Cam.

The Sixers gave them plenty of reason to have fun. The Sixers went just 1 of 3 from the free-throw line while the Spurs were 12 of 13 and still led 60-52 at the break. The reserves got the bulk of the scoring time in the second half and built a 35-point lead.

The Sixers won their fifth straight game, a needed cushion without Embiid before they leave for a six-game trip later this month.

Derrick White and Drew Eubanks led the Spurs with 17 points.

“They punched us in the face,” Spurs guard Dejounte Murray said. “They didn’t let up. I felt like we just couldn’t get the ball to go in and we couldn’t get stops. That makes it hard.”

Simmons waved for fans to get loud after a dunk and flexed his muscles after a bucket in the third that sent a crowd of 3,000 into as much of a frenzy as a crowd of 3,000 can get. Simmons will need to carry the load with Embiid out — even if that means weeks or more without the big man.

“We’ve got to hold it down,” Simmons said. “We’ve got all the pieces to win.”