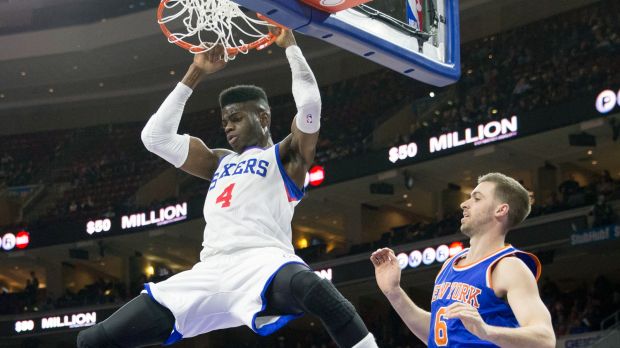 THE MAKING OF A STAR: NOEL BREAKS OUT IN SIXERS’ WIN OVER KNICKS

Nerlens Noel had a career-high 23 points, 14 rebounds, five steals and three blocked shots in the 97-81 victory.

The 10,000 people who made it through the snow and slush to the Wells Fargo Center last night were treated to the Sixers beating the even-worse-than-they-are New York Knicks 97-81.

But they may not have been aware of the historical significance of the game:

It was the first time all season that the Sixers had been the betting favorite in a game — a half-point so they easily covered.

But they certainly were aware of Nerlens Noel’s emergence as a star on the team and in the NBA.

Noel scored a career-high 23 points and grabbed 14 rebounds, and though Minnesota’s Andrew Wiggins is the likely choice for the league’s rookie of the year, Philly coach Brett Brown thinks Noel should be considered.

”He’s had a hell of a year,” Brown said. ”I’d say you have to pay attention to Nerlens. His defensive presence, his ability to steal and block shots, what he’s now doing in regard to finishing … I think he has to be in the mix of that conversation.”

Ish Smith added 15 points for Philly, which has won four of seven.

Alexey Shved made seven 3-pointers and had a career-best 25 points for the Knicks, who lost their fourth in five games. New York dropped to 14-55, the worst record in the NBA and three games behind the 76ers.

The team that finishes at the bottom of the overall standings will have the best chance to land the No. 1 pick in the NBA draft lottery. The club with the worst record will have a 25 percent chance of getting the top pick, while the second-worst has odds of just below 20 percent.

Noel has scored 16 or more points in four of the past five games. His offense has emerged since the 76ers traded point guard Michael Carter-Williams to the Bucks last month.

”I think it’s just coming along, with my confidence, continuing to wanting to be assertive on this team, you know, be the go-to guy,” Noel said. ”Continue to just progress and dominate any way possible.”

Noel added five steals and three blocks, joining Shaquille O’Neal as the only rookies to post that many points, rebounds, steals and blocks in a game.

”He had a disposition tonight that he wanted the ball, and we got him the ball and he had arguably his best NBA game,” Brown said.

The 76ers extended their six-point halftime lead to 80-66 to begin the fourth quarter. They took a 17-point lead early in the final period on Isaiah Canaan’s 3-pointer with 10:56 remaining.

”They were quicker to the ball, they were more aggressive, more physical, more athletic,” Knicks coach Derek Fisher said.

Philly outscored New York 26-18 in the third quarter. Noel had eight points in the period, including consecutive athletic baskets midway through the quarter. First, he finished an alley-oop dunk after a pass from Smith before an acrobatic layup resulted in a three-point play that put Philly up 72-58 with 6:45 left.

Shved, who played in 17 games with the 76ers earlier this season before being shipped to Houston prior to his trade to the Knicks, continued his strong play since replacing Tim Hardaway Jr. in the starting lineup eight games ago.