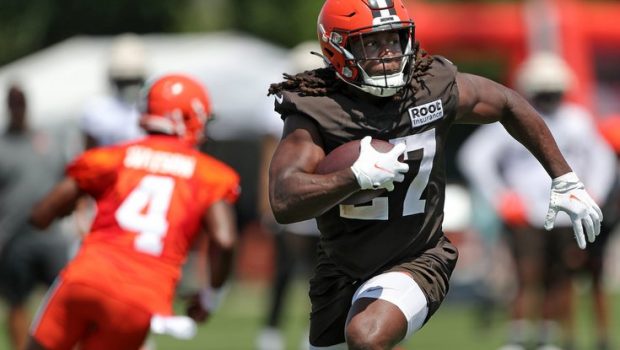 WHY KAREEM HUNT MAY SWITCH FROM BROWN TO MIDNIGHT GREEN!

Miles Sanders is hurt and Kenny Gainwell is only a sophomore in the NFL.

So, it makes sense that the buzz around the Birds trading for Kareem Hunt is getting traction.

Hunt wants to be traded.

So, the timing is lining up.

Hunt is a big back who is physical between the tackles, but who is also an accomplished receiver.

He was a third-round pick of the Chiefs who immediately became a star player his rookie season in 2017, leading the NFL with 1,327 rushing yards.

In Year 2, he was outstanding once again, racking up over 1,200 yards from scrimmage and 14 total TDs in 11 games before a video emerged of him assaulting a woman.

He was quickly and rightfully released by the Chiefs, ending his 2018 season.

Hunt landed with the Browns in 2019 as a reclamation project, backing up another star running back in Nick Chubb. His opportunities have since been limited, but when called upon he has produced. In 2021, Hunt averaged a hair under five yards per carry. As you can see below, Hunt can do everything a player like Howard can, but so much more. (You’ll have to click “Watch on YouTube” to see the video.)