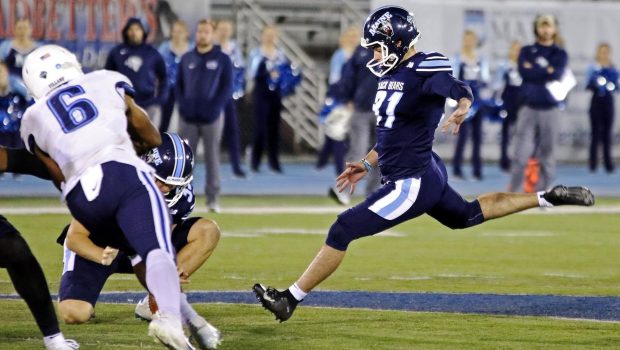 Kenny Doak kicked a 52-yard field goal as time expired to lift Maine to a stunning 13-10 victory over visiting Villanova.

Maine got the ball at its 17-yard line with 1:39 remaining and moved downfield to set up Doak’s winning kick, which barely made it over the crossbar.

With both starting quarterbacks – Maine’s Chris Ferguson and Villanova’s Zach Bednarczyk – out with shoulder injuries, this was a defensive struggle. Maine held Villanova to just 181 yards of total offense and had four sacks and two interceptions. The Wildcats also had two interceptions as well as a fumble recovery.

And it certainly appeared to be heading to overtime when the Black Bears stopped Villanova at its 41 on the Wildcats last drive. But Harasymiak was not going to let Villanova get another chance at the ball if he could help it.

“We didn’t want to be conservative,” he said. “We wanted to be aggressive.”

“I know Joe a little bit and I didn’t think he was going to play for overtime,” he said. “You play for the win … especially when the game is tied.”

The winning drive began innocently enough with a 3-yard run by Joe Fitzpatrick, who led Maine with 66 rushing yards and scored a touchdown in the third quarter. Then Isaiah Robinson, in for Ferguson, found Fitzpatrick for a 6-yard gain. Fitzpatrick ran for 10 yards on third-and-1.

After an incompletion, Robinson found Jaquan Blair for 20 yards to the Villanova 44.