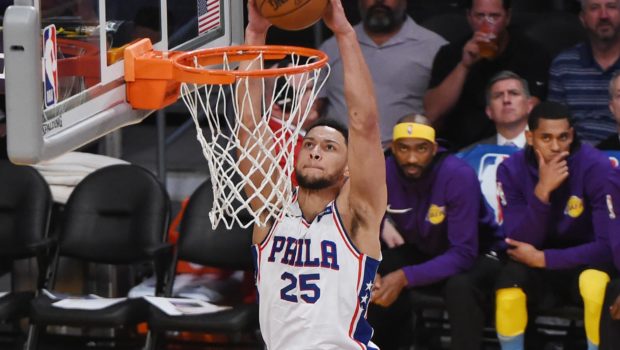 Ben Simmons may not play tonight against the Wiz, but he leads all rookies in points, rebounds, assists and steals per game.

“The first game I played, against the Wizards, that’s when I was definitely (feeling) the game was quicker,” Simmons told NBA.com. “And then preseason, it was a lot quicker before we actually got in the season. For now, I know I can control the pace of the game. I’m somebody who likes to run and I know a lot of guys aren’t trying to sprint down the court every single time. So attacking them when they’re backpedaling, it’s tough to guard.”

After missing what would have been his rookie season last year with a foot injury, Simmons, the first pick overall in the 2016 draft, is flourishing, the very place where Joel Embiid seemed to redefine what was possible for a big man a season ago. In doing so, Simmons is, in his first tour around the league, making his own mark at point guard. No man who handles the rock every night has stood as tall at the 6-10 Simmons – Hall of Famer Magic Johnson was 6-9. And in an era where everyone must shoot 3-pointers or be branded as wanting by many in the advanced stats community, Simmons simply refuses to shoot them — ever — unless they’re end-of-quarter or half-court heaves.

Simmons leads all rookies in scoring (18.5 points per game), rebounds (9.1), assists (7.7) and steals (2.1), contributing across all lines and at the defensive end, providing two-way play that’s as good as any rookie since David Robinson (24.3 points, 12 rebounds and 3.9 blocks per game for San Antonio in 1989-90, leading a 35-win improvement over the previous season for the Spurs) or Wilt Chamberlain (a cartoonish 37.6 points and 27 rebounds per game in 1959-60 for the Philly Warriors).

Oscar Robertson’s rookie line in Cincinnati in 1960-61 — 30.5 points, 10 rebounds, 9.7 assists per game — remains the all-time standard for a first-year point guard. Simmons will not come close to “The Big O” in terms of scoring average, but he doesn’t have to and he’s not being asked to do it. He just takes what’s available — and then, a lot of what doesn’t seem to be.

“I didn’t think it would come this quickly for me to get this comfortable and to improve every game, but it did,” Simmons said. “Overall I’ve felt like every game I’ve been able to score, or get to the rim, or get shots when I want, and feel comfortable.”

Simmons has injected even more turbo fuel into “The Process”, the prize for a 10-win season two years ago. With Simmons and Embiid on the floor — and without the injured Markelle Fultz, taken first overall by the Sixers in the 2017 Draft — Philly has 11 wins already in the first quarter of the season.

The Sixers have skyrocketed from 28th in home attendance two years ago to 18th last year to second this year, averaging 20,667 through eight home dates. Only the Chicago Bulls (21,363) are doing better.

“We kind of got a taste of it last year,” Embiid said Friday. “And then this year, getting Markelle as the No. 1 pick, Ben coming back and then the excitement of last year, it’s pretty great, and I love it. The fans are passionate, and I love it. I know they have my back and they have our back. I think you just kind of expect it because we have so much talent.

“The future looks bright. It’s a good thing that the fans are coming in and showing their support, because I know they want to do that. And they’re passionate about it. They want us to win games. They want us to be in the playoffs.”

“Our goal is to win the championship for as long as we can keep everybody together,” Simmons said Sunday. “That’s our goal, to win it all. Everybody loves being here. Everybody loves the coaches here, Bryan (Colangelo, the general manager), all the guys up top, they’re all good people. I think it just takes time, and that’s our goal. Philly fans are the best. They show a lot of love wherever I am, whether I’m at dinner, walking down the street, coming out of my apartment, they show a lot of love.”

The hard-core fans were always there, but now the casuals are back, enough to pack Wells Fargo Center on a cold Wednesday night before Thanksgiving (yes, a lot of kids and families may be in town for turkey the next day, but still) to see the Sixers play the Trail Blazers — all due respect to Portland, currently not a league powerhouse.

And Simmons, as he’s displayed throughout his rookie season, controls the game. He is only 8 of 20 this night, but still nets a +18 on the evening, just falling short of a triple-double with 16 points, eight rebounds and nine assists. His team doesn’t play great — a “C-minus” on offense, Sixers coach Brett Brown says — but it’s a sign of how far things have come in the Illadelph that the 76ers can be mediocre on one side of the ball and still win a game comfortably.

“We understand we haven’t done anything yet,” Brown tells you afterward. “We really haven’t. It’s not a throwaway line. We completely understand that. Our goal is to make the playoffs. Everything that we do and talk about and drill, we do it with that spirit. When it doesn’t reach that standard, it’s easy for me to remind them that I lived a privileged life in San Antonio, and that is not of a playoff standard. We want actions and not just coined phrases and words.”

Anyone with a functioning heart is happy for Brown, who wore every one of those 253 losses on his ledger the first four years of “The Process” as he continued to try and develop the seemingly endless parade of players that came through Philly. There were successes amidst all the losing, with Robert Covington and T.J. McConnell both becoming reliable rotation players. But no one saw more bottom to get here than Brown did.

“I was actually pretty surprised,” Embiid said of Simmons’ fast start. “I watched him play against the guys this past summer, and he was kind of hesitant. That was the way that we were guarding him. He would always take the running hook or the floater. It wasn’t going well for him. And then, we just started, I guess the games are different. He’s making a lot of those. And he’s going to get anywhere he wants to go — he’s so big, he’s so fast, he’s so athletic.”

“From a young age, he wanted me to be able to do everything he couldn’t do,” Ben Simmons says. “I think that’s where it comes from, him telling me to dribble the ball, take whatever shots I want, be creative on the court. That allowed me to be who I am today. I still, in practice, I’ll do crazy (things), because that’s how you learn. You have to make mistakes to learn. Even if the coach does get mad in practice … I’m confident in my abilities so I’m not worried about messing up. I know I’m going to have bad games, I’m going to have good games. You just have to play hard. So that comes with it.”