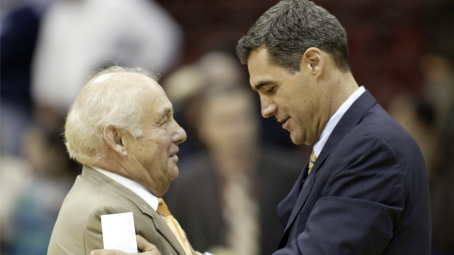 Daddy Mass on the left with his former protege and Villanova assistant Jay Wright.

It has been 30 years to the day since Villanova shook up the world and beat Georgetown 66-64 for the 1985 NCAA championship.

And the man who orchestrated that title thinks he knows if they’ll be a comparable upset this year.

Legendary Villanova coach Rollie Massimino on whether Kentucky will lose:

Why do you say that?

“Well, because I think Wisconsin really moves the ball, and they reverse it and hit it inside,” Massimino said. “And [Frank] Kaminsky is a pretty good player.”

Massimino is asked if he thinks there is added pressure on 38-0 Kentucky being unbeaten. Patrick Ewing and mighty Georgetown were a mere 30-2 before the eight seeds from Villanova took them down in the 1985 NCAA final.

“That’s part of it. I mean, they’re a bunch of young kids,” Massimino said of Kentucky’s relative inexperience. “But I think Wisconsin’s got two great players [Kaminsky and Sam Dekker] and then they got a cast of other good kids that can really play.”