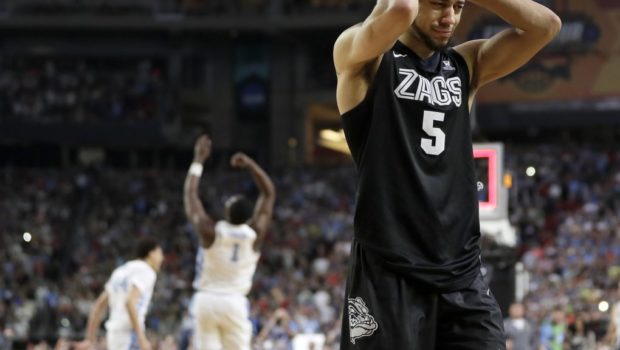 MADNESS SADNESS! ZAGS WERE SO CLOSE BUT SO FAR!

It was a ball screen to get Nigel Williams-Goss going downhill to the rim, the way he has hundreds of times this season.

Gonzaga, down by three points in the closing seconds of the national championship game, was going to take the easy two and test North Carolina’s nerves at the foul line in the final 15 seconds.

But Williams-Goss (above), the Zags’ best player, never got his shot to the rim. In fact, it never got beyond the right palm of Kennedy Meeks, whose block led to a run-out dunk for Justin Jackson, clinching a 71-65 victory for North Carolina.

As Jackson celebrated, Williams-Goss was 94 feet away, crouched on the baseline, tears beginning to fall. Gonzaga coach Mark Few paused for a moment, started clapping, even though the championship had already been decided. Then he bent down, put his arm around Williams-Goss and whispered in his ear to begin a process of grief that will probably take awhile to recover from.

That’s just how it is when teams lose a very winnable title game, which this was for Gonzaga. But even though Williams-Goss missed the final two shots after turning his right ankle with 85 seconds left, the Zags will at least be able to live with this: Every possession down the stretch, for better or worse, the ball was in the hands of their best player.

“He’s our closer,” assistant coach Tommy Lloyd said. “I wouldn’t do it any different.”

As Gonzaga players and coaches replay the “what-ifs” in their minds, they’ll undoubtedly think about big man Przemek Karnowski uncharacteristically struggling to finish at the rim in his final college game, making just 1-of-8 shots. They might think about nine missed free throws or the foul trouble that took Zach Collins, Gonzaga’s most effective big man, off the court early in the second half and then for the final 5:03. 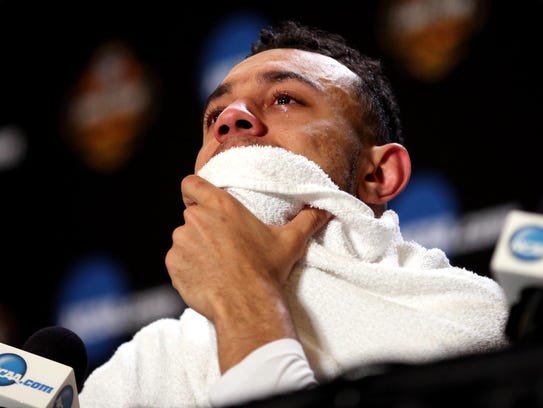 But ultimately, in a possession-by-possession game down the stretch, it looked for a moment like Williams-Goss, the West Coast Conference player of the year, was going to rise above the chaos and the pressure to deliver the big baskets.

With 2:24 left, he drove Jackson into the paint and then scored on a one-handed runner to put Gonzaga up 63-62. Then, with 1:52 remaining, he got isolated on the left side and boldly shot a 15-footer that went in off the window, putting the Zags ahead 65-63.

“He got going in the second half,” point guard Josh Perkins said. “He was going to take us home.”

With Williams-Goss in rhythm and Karnowski struggling, Gonzaga had no other real option to create offense down the stretch. But that was fine with Few. Trailing 66-65 with 1:40 left, they called play to isolate Williams-Goss, this time on Theo Pinson, looking to get another post-up near the paint.

But dribbling toward the sideline, Williams-Goss got his foot tangled and immediately came up grabbing his right ankle, which he had tweaked on Saturday in the semifinals against South Carolina.

“I sprained it pretty good,” said Williams-Goss, whose final line of 15 points (5-of-17 field goals), nine rebounds and six assists was representative of how gritty he had to be to give Gonzaga a chance. “I stepped on it wrong and rolled it. But my adrenaline was rushing. Nothing was going to stop me from finishing the game.”

The officials stopped play for a moment to allow Williams-Goss to collect himself, though he was still limping a bit when Gonzaga came back onto the court. With 1:15 left, he got a good look from 17 feet, just left of the elbow, but couldn’t get the shot to fall.

“He’s a top-5 Wooden Award finalist,” Gonzaga sixth man Silas Melson said. “We’re going to live with that any day. He’s worked for it. He’s had a great season. He’s hit big-time shots he’s made big-time plays. You can’t get mad because we know the work he’s put in, and that time it just didn’t fall for him.”

Ultimately, it was North Carolina’s ability to execute on the corresponding possessions down the stretch that made the difference. Had Gonzaga been able to stop Jackson’s layup plus a foul off a beautiful cut and feed by Pinson with 1:40 left or corral a rebound with 49.1 seconds left or prevent a leaning layup by Isaiah Hicks with 25.4 to go, its options down the stretch would have been different.

But given the need to create baskets, Gonzaga was going to live or die with Williams-Goss, its only real shot creator off the bounce, having the ball in his hands on every possession — bad ankle or otherwise.

And if Gonzaga is somehow back in this position next year, they’ll probably do it again the same way.

“He laid it all on the line, and he was the guy that obviously kind of strapped us on his back there, and we were having some real success going to him on some isolations. He was delivering, Few said. “He had a great shot that kind of rolled in and out, and then that last one was tough. I think he didn’t get lift off his ankle like he usually does. But we were basically shuffling through all our options there at the end, and I certainly wasn’t going to go to anybody else to take the last shot.”