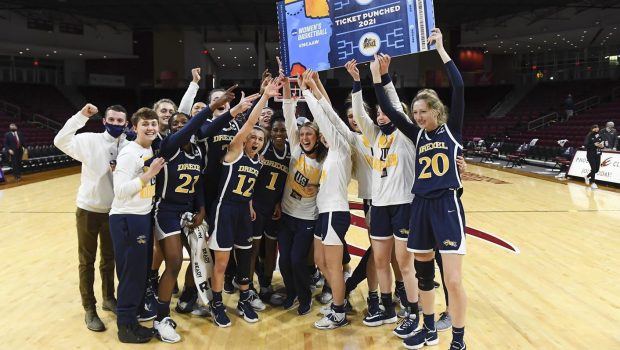 The Drexel women will face Georgia in the first round of the NCAA tourney as a No. 14 seed in the Alamo Region. The game, which will be played at St. Mary’s University in San Antonio, will tip off at noon on Monday, March 22 at on ESPN2.

The Dragons earned their second NCAA Tournament bid when they defeated top-seeded Delaware 63-52 in the championship game of the CAA Tournament Saturday night.

Georgia is the No. 3 seed in the Alamo Region. The Lady Bulldogs went 20-6 overall and 10-5 in the Southeastern Conference, where the fourth-seeded Lady Bulldogs made the championship game before falling to South Carolina, 67-62. South Carolina earned the No. 1 seed in the Hemisfair Region of the NCAA Tournament. Georgia beat Texas A&M, the regular season champions and the No. 2 seed in the Mercado Region of the NCAA Tournament, in the semifinals. Head Coach Joni Taylor, now in her sixth year in Athens, was named the SEC Coach of the Year in 2021. Meanwhile, senior guard Que Morrison was tabbed as the SEC Co-Defensive Player of the Year, senior center and leading scorer Jenna Staiti was named a Second Team All-SEC selection, and Sarah Ashlee Barker earned a spot on the SEC All-Freshman Team.

Drexel and Georgia will be squaring off for the first time in the programs’ histories.

All games in this year’s tournament will take place in the San Antonio area to limit travel as a result of the Covid-19 pandemic. All four regions were named after San Antonio landmarks. The fourth region is the River Walk Region.