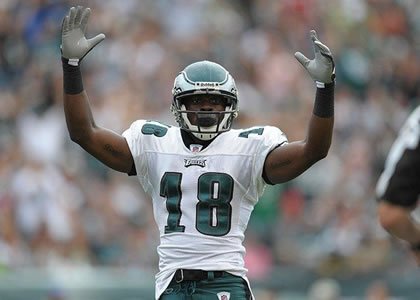 The essence of the NFL in December is all about match-ups.

The Eagles host the Seattle Seahawks this weekend in a game that will likely determine one of the two first-round byes in the NFC playoffs.

And one of the most fascinating match-ups in this crucial game will be Eagles’ premier receiver Jeremy Maclin (photo above) and against Seahawks; supreme cornerback Richard Sherman.

A leading candidate for NFL comeback player of the year, Maclin has established himself as a legitimate No. 1 receiver. He’s producing as the Eagles hoped he would in place of DeSean Jackson, who signed with the Washington Redskins after he was released last offseason.

Maclin has caught 71 passes for 1088 yards and nine touchdowns in 12 games. Those numbers put him on pace for roughly 95 catches, 1451 yards and 12 touchdowns, which would be arguably the best season by a receiver in Eagles history.

However, Maclin will face the toughest competition of the season on Sunday in the form of Sherman, the self-proclaimed best cornerback in the game.

Sherman, the fourth-ranked corner this year by Pro Football Focus, is allowing just a 48.6 passer rating. He’s allowed only 23 completions for 329 yards all season, and he intercepted two passes against Colin Kaepernick on Thanksgiving night.